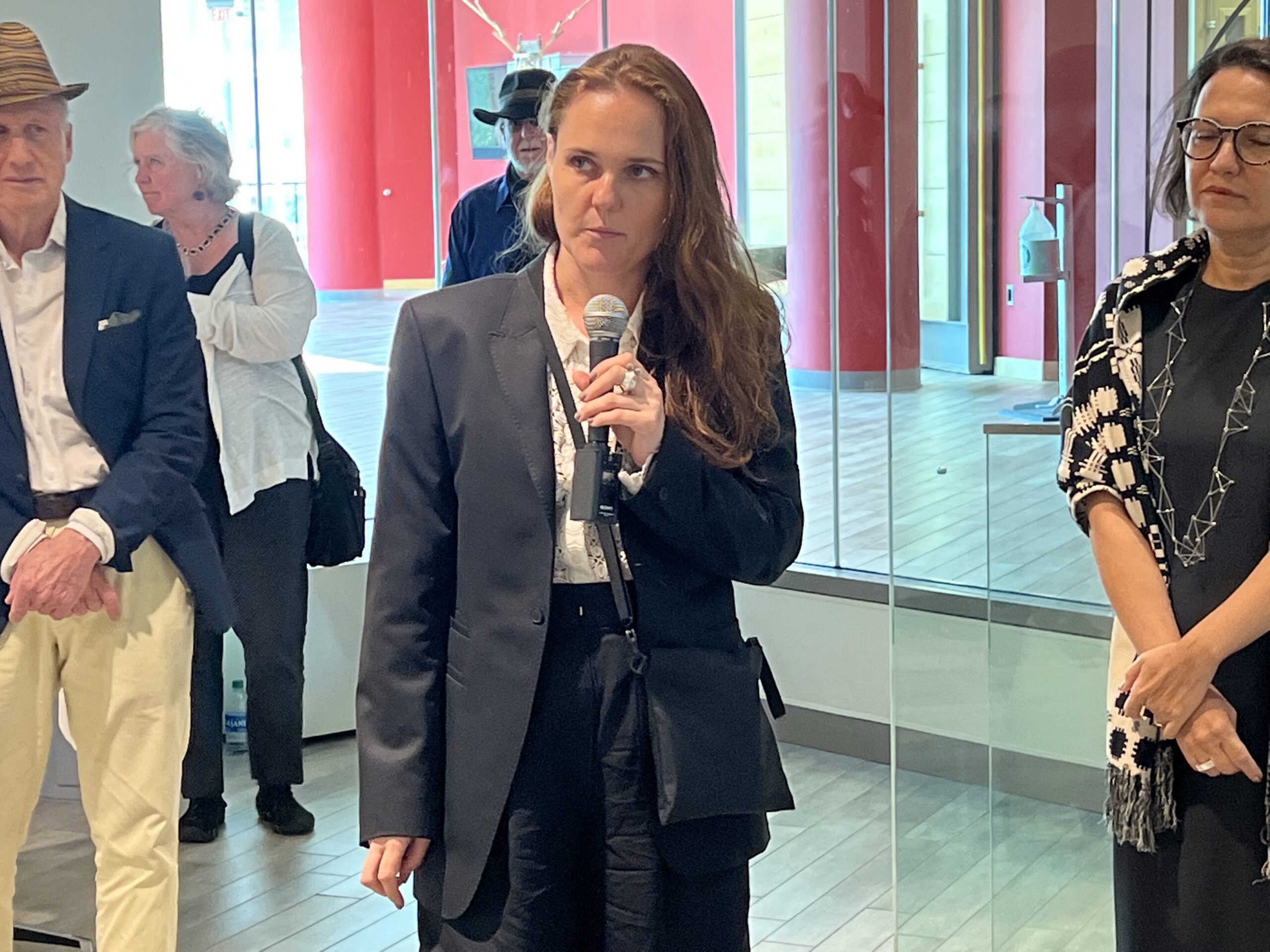 WILLIMANTIC — For artist Lesia Khomenko, painting life-size portraits of Ukrainian soldiers was a way to keep calm and distance herself from the war raging around her.

“I produce distance from the problem, and that helps me survive as a human,” Khomenko told viewers Wednesday at the Eastern Connecticut State University Art Gallery.

Khomenko, a resident of Kyiv, said she moved about 20 times in the six months after Russia attacked Ukraine on February 24, before coming to the United States. Her husband, Max, a sound artist and musician turned soldier, remains in Ukraine. In one of his oil paintings, he stands tall in a gray jacket and trousers, his hand to his forehead in a salute.

Khomenko is one of 14 female artists featured in a new exhibit, “Women at War.”

The exhibition, which features photographs of life in a war zone, ink drawings depicting childhood in an occupied town in eastern Ukraine and graphic depictions of violence against women in wartime, was inaugurated at the Fridman Gallery in New York.

Monika Fabijanska, the curator, told CT Examiner she hopes the exhibit will refocus public attention on the now six-month-old war, after the summer holidays and the passing of time.

ECSU curator Julia Witner said she thinks the exhibit will expose students to a part of the world they wouldn’t otherwise have access to in their “quiet corner” of the state.

“Our students are often Connecticut-based and Connecticut-born and Connecticut-raised,” Witner said. “So for them to see the true work of art that [were] produced recently in reflection on this current war is perhaps a life experience…a revealing event.

The exhibition includes four paintings by Khomenko: the portrait of her husband and three paintings of masked or pixelated soldiers’ faces. Khomenko said she based these paintings on selfies she found on the internet, which soldiers often take when they receive aid packages. But the soldiers or outside groups who come to the aid of the Ukrainians blur the faces of the soldiers because it would be too dangerous for them to be recognized.

Khomenko said she sees these photos — pixelated, blurred and altered — as almost a new kind of human who was part robot. She said she wanted her paintings to be “a bit creepy” to emphasize the dehumanization of these photographs. She compared the war photographs that flooded the internet to “pornography.”

“Our internet is full of disgusting corpses. And we as a society since March have been looking at bodies every day,” she said. “I think in the next few years…it will change society – not just society Ukrainian.

“Everyone is a loser”

The artwork dates back to 2014 and the first Russian invasion of Crimea, and the ongoing conflict in the eastern region of Ukraine, known as Donbass, between Russians, Russian-backed separatists and Ukrainian soldiers. Winter noted that Ukrainians view the latest invasion not as a new war, but as a continuation of this eight-year-old conflict.

The choice to focus on female artists stems in part from Fabijanska’s own training as a feminist historian. She said that women’s stories often get lost in historical accounts of events and that war is a central part of human history.

“I’m really curious [to hear] their voices and imagining them as witnesses and as those who write history, because of course art is also a document of history,” she said.

Witner pointed out that women currently make up around 25% of fighters in Ukraine, in addition to having to take care of homes and children. She said it was a testament to the strength of women.

“Even in times of peace and no war…we women are stronger than we know. And I think we should just be more assertive and take more power in everything we do and certainly be proud of ourselves in every part of our lives,” she said.

Fabijanska said a common theme among several artists was a desire to tell the story of the war from the perspective of the people who suffered its consequences, rather than the “winners”.

One exhibit, a series of photographs of life in the eastern region of Ukraine from 2014 to 2017, highlights this theme with its title, “Victory of the Vanquished”. The artist, Yevgenia Belorusets, has focused her work on women coal miners in the eastern Ukrainian region of Lugansk, and how they resisted military rule.

In an artist statement, Belarusians noted that since the 2022 bombing, conditions in the city have only gotten worse – the railway linking the region to central Ukraine was bombed in March, from many places lost power and communication lines were cut.

“An acquaintance who left Lysychansk in the days after February 24 told me about his friend, an elderly teacher, who had been buried by her son in a small garden in the courtyard of their house. She had died in the bombardment, but reporting her death was complicated, the family only turned on their phones for a few hours a week,” Belorusets wrote.

Artist Alana Grom approaches a similar theme from a different perspective, with her photographs of women who gave birth and raised children in the Donbass war zone. According to Fabijanska’s essay, many of these women stayed with their babies “in cold, damp cellars for months.” One of the photos on display at Eastern shows two children, a girl and a boy, holding hands and looking up from the back of a cellar.

Grom herself lost her home in 2014 and became internally displaced.

Fabijanska wrote in an essay accompanying the exhibition that the understanding of feminism in the countries of the former Soviet Union is different from that of the West – after World War II, when Western women returned to the domestic sphere, Eastern European women had to continue to assume men’s roles in the labor force while tending to the home, leaving them exhausted and still without the same rights as men.

Historically, Fabijanska explained, women in the West mobilized on the “home front”, while women in the East took part in uprisings, since “every war was fought at home”. Yet their stories, she said, are not on the record.

“Women are generally absent from historical accounts of war, but raping a woman is seen as a violation of land and nation,” she writes in her essay.

Another series of drawings, by artist Dana Kavelina, highlights the effects that rape, a tool of war, has not only on women but on society. One shows a man with his hands covered in blood and a woman with her lower body covered in blood; above the man is written “honor” and above the woman “dishonor”. A second coin points out that the word “nation” comes from the Latin root meaning “to give birth” and a third shows an image of hands tied together with red thread leading to a woman’s vaginal area.

The accompanying text reads: ‘We are all linked now’.

“Save me from horrible nightmares”

Often, artists’ personal stories are part of their work. Fabijanska noted that while the majority of artists lived and worked in Kyiv, many of them were born in eastern Ukraine. When she started organizing the exhibition in the spring, almost all the artists were still in Ukraine. Now there are only two or three left.

The divide between family members who fled and those who chose to stay at home – many elderly people – is the subject of Strawberry Andreyevna.

Alevtina Kakhidze drew a series of panels resembling graphic novels illustrating phone conversations she had with her mother over the course of five years, from 2015 to 2019. In one panel, she sketches the scene of people standing in the cemetery local talking on their cell phones – it was the only place that had cell reception.

Fabijanska said that of the approximately 3 million Ukrainians who remain in the Donbass region, around 1.2 million are elderly. These pensioners must cross to the Ukrainian side of the demarcation line every two weeks to receive their pension.

“There are checkpoints. Their documents are checked by the military on both sides of the line. It’s an extremely stressful situation,” Fabijanska said.

During one of these excursions, Kakhidze’s mother died at a military checkpoint from cardiac arrest in 2019.

Another artist, Olia Fedorova, spent nearly three months between her apartment and a bomb shelter in her hometown of Kharkiv, which was constantly bombed from February 24 to May 13. Left without any materials she could use to make art, she resorted to writing poetry with markers on scraps of bed linen. The result was a series of nine poems, called the “Tablets of Rage”. The one displayed at Eastern, titled “May You Choke on My Soil” is a curse on Russian soldiers invading Ukraine.

Fabijanska said the series of poems begins with several addressing the enemy. Then they change tone. The last poem, written ten days before his flight to Austria, is addressed to God.

Never let me forget my roots,

But don’t let the past swallow me up either.

Give me enough rage to keep fighting,

And that pain and anger no longer poison my soul….

Give me merciful dreams and save me from horrible nightmares.