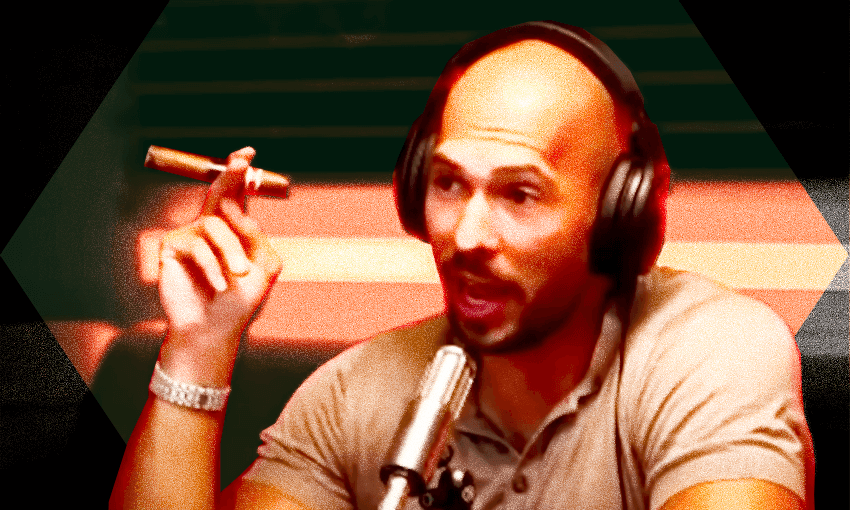 The controversial internet star now outranks Trump on Google searches. But who is he and why is he causing so much concern all of a sudden?

What is all this?

Last week, the behemoths of Instagram news Shit you should care about shared a post from a teacher at an all-boys secondary school in Aotearoa, lamenting that internet star Andrew Tate has become a “toxic addiction” for their students. “The majority of our students, especially the juniors, are obsessed with him and the outlandish opinions he portrays,” they wrote. “What’s more terrifying is that they actually see him as a role model.”

How can he be a role model if I’ve never heard of him? !

You are one of the lucky ones, please savor these last moments without Tate as we are about to make your world a little worse. Andrew Tate is a 35-year-old former kickboxing world champion and reality TV star who made millions running an adult cam business called “myfreecams” with his brother. At the height of the site’s success, he claims to have had 75 women working for him across four sites, and that he was making $600,000 a month, although his brother has publicly called the business a “total scam”. He is also the subject of an ongoing investigation into human trafficking in Romania.

Tate now runs a business called Hustlers University where he teaches men — sorry, soldiers — how to be hustlers for just $49 a month. The Hustlers University Discord currently has over 140,000 members, largely helped by a program that rewards affiliates with 50% of the fee for new signups. Sound familiar? Sounds… pyramid? When he’s not the chancellor of Hustlers University, Tate seems to spend a lot of time smoking cigars, lying in a big bed, posing with his guns, and guesting on podcasts with names written in all caps.

Wait a minute, is that Joe Rogan?

Surely he can’t be so controversial, he even called himself a feminist once?

Was it before or after he said, “I think my sister is her husband’s property”? Or lamenting the rise of physically strong female characters in movies, suggesting they should just “suck dick and cook” instead? Or was it when he was banned from a plane after taking a photo of the female pilot and posting it with the caption “most women I know can’t even park a car why does a female pilot does she have my plane”? Or was it when he decreed that “if a man has slept with 20 girls or 200 girls, he’s still the man.” If a woman has slept with 200 men, she is worth nothing”? Or was it when he argued that the female creators of OnlyFans should pay an allowance to their male partners because “the private parts of her body belong to her”? I hope Gloria Steinem is taking notes.

Why does everyone suddenly know him now?

This is partly due to his appearance on some high profile Twitch streams like AdinRoss, but it’s mostly because of the aforementioned triangle-shaped scheme that has earned it a lot of attention. Through tribute accounts called Tate Clips, Tate Teacher, Tate Basics and Tate Speech, people are encouraged to compile and cut his controversial media appearances for mega-views, often with a link to Hustlers University. in the description area. “I hatched a plan to take over TikTok four months ago, boom, now it’s done, I own it,” he said CEOCast earlier in the year. The hashtag #andrewtate now has over 12.4 billion views on TikTok, and on YouTube it’s no different.

Listen, we have good years of evidence on why angry white men spitting bigoted bile at millions online are dangerous. What’s even scarier about Tate is the extent to which he seems to influence (pre)teens and young men, including here in Aotearoa. The concerned teacher who contacted SYSCA said that their students “were sincerely beginning to believe that succeeding was synonymous with female abuse” and that they had heard male students as young as 13 say that victims of rape “asked”. As Executive Director of Rape Prevention Education Debbi Tohill told Newshubthis attitude can be “really damaging” to young people, especially given the harmful gender dynamics already imposed by pornography.

Why isn’t TikTok doing anything about it?

In this investigation by The Observer in the rise of the misogynistic algorithm, TikTok responded with the following: “Misogyny and other hateful ideologies and behaviors are not tolerated on TikTok, and we are working to review this content and take action against violations of our guidelines. We are continually looking to strengthen our policies and enforcement strategies, including adding more safeguards to our recommendation system. As an experiment writing this, I signed up for TikTok as a 13 year old boy interested in “comedy” and “hacks” and received a video from Andrew Tate within 60 seconds of the scroll.

Stories like these are fueled by the generous support of our members. If you appreciate what we do and believe in the importance of independent and freely accessible journalism – tautoko may, donate today.