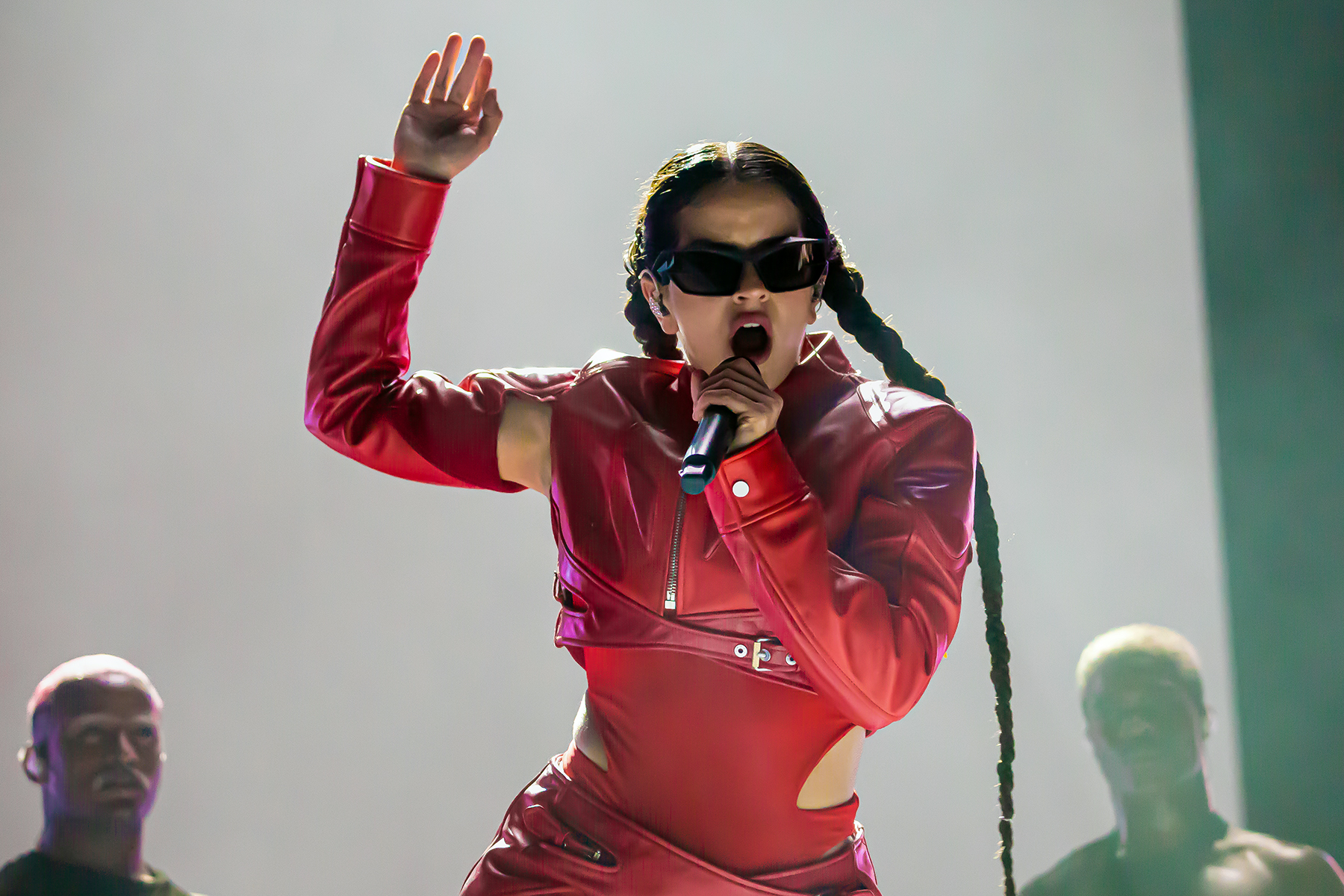 Throbbing lights, loud distortion noises and a neon-lit motorcycle helmet with pigtails – Rosalía’s first seconds Motomami the tour stop in Madrid delivered all the spectacle you expected. She entered on all fours, crawling, flanked by eight male dancers, motopapis. Together, they beat the beat in sync as they made their way to the seamless white backdrop on the arena stage at the WiZink Center on July 19, for one of his biggest and most important shows ever. this day.

The Spanish star has made it clear that she wants to experiment and push the boundaries of her music. His breakthrough 2019 album, El Mal Querer, masterfully incorporated flamenco, in which she was classically trained, with modern electronic and pop sounds. His latest album defied expectations by adding a frenetic barrage of reggaeton, bolero, jazz, bachata and more to his flamenco pop base, all orchestrated by his vision and resulting in an unmistakable sound.

Reaching center stage, Rosalía took off her headphones and immediately let out that voice, that crystal-clear voice, for the opening number “Saoko.” Although sound problems in the room forced her to change microphones mid-song, the battle cry “Yo me transformo” did not fail to raise the 15,000 fans in the crowd. Like the butterfly which is one of her favorite patterns, she is all about transformation. On stage, she broke free from the comfortable confines of pop performance at which she once excelled, and that included throwing away the standard arena tour playbook.

Rosalía performs at the WizInk Center in Madrid, Spain.

For this tour, Rosalía ditched her nail claws and diamond-encrusted teeth. In this first of two Madrid shows, she wore a cropped biker jacket and red leather miniskirt over a red bodysuit and matching knee-length leather boots. Rosalía spun a wardrobe of monochromatic colors on the tour, all sexy and tough, playful yet controlling, all of which came to define the powerful Motomami essence that she embodies beyond the album. There is no costume change.

She does it all: she sings and dances, sings while lying on the floor, filming herself with a phone camera, getting caught by her dancers and even cutting her hair during one of the highlights of the show . Sitting alone on a barber chair, singing the track “Diablo” (originally recorded with James Blake), she cut her two long braids with scissors and removed her eye makeup with a white towel. She untangled her hair, got rid of the black eyeliner and continued the show.

Fans have already seen this striptease ritual on stage on Instagram and TikTok, and they knew the set list and what to expect from this world tour, which kicked off earlier this month in Almería, Spain. and will take it to 15 countries around the world until December. Nothing is surprising, not even one of the many unreleased tracks she performed, “Despechá”, tinged with Dominican mambo, which the crowd sang with as much enthusiasm as most of the 30-plus tracks in the set. (only two of which, “Malamente” and “Pienso en tu Mirá”, come from El Mal Querer). The fans are not bothered by this, on the contrary; they feel part of the show and closer to their idol.

This blank slate of a scene is also familiar to its audience: it’s an extension of the entire TikTok livestream that was part of the Motomami launch in March. This immersive experience was translated on stage by a cameraman who could very well have been the ninth motopapi dancer, constantly hovering around Rosalía, even standing right in front of her and blocking her from front view. But that’s the point: She sang straight to that camera for the big screens behind her, as well as the multiple camera phones her dancers also pointed at her. At one point, she sang into a phone she was holding as she walked towards the crowd while singing “La Noche de Anoche” and passing the microphone to fans to sing the Bad Bunny parts.

Rosalía performs at the WizInk Center in Madrid, Spain.

Does Rosalía really need a live audience when she sings for the cameras? The Madrid attendees loved it – she spoke their meta-language, and they enjoyed the multiple viewpoints on the big screens that they could then film on their own phones and stream around the world. The likes of filmmaker Pedro Almodovar, who arrived with actor Pedro Pascal, rappers Residente, Alvaro Díaz and Kaidy Cain, and Spanish actors Rossy de Palma and Miguel Angel Muñoz, were spotted in the crowd and also lounging in the glow of Motomami.

Even though Rosalía performed all of her most notable collaborations (including “Con Altura” with J Balvin, “TKN” with Travis Scott, and “Blinding Lights” and “La Fama” with The Weekend), she sang on all these stars. plays, and they weren’t missed. The only pre-recorded voice we heard was Dominican star Tokischa on “Linda” and “La Combi Versace.” Rosalía’s vocals and little else filled the arena for headliners like “G3 N15”, then moved on to headbanging and distortion for the closing song “CUUUUuuuuuute”. The show also included a medley of Lorna’s “Papi Chulo”, Daddy Yankee’s “Gasolina” and other songs to pay homage to Rosalía’s love of classic reggaeton. Another unexpected moment was his slowed-down cover of “Perdóname” by 2000s Panamanian band La Factoría, which later morphed into pure flamenco, “De Plata.” Yes, she can get away with it.

So Motomami tour, it’s about minimalism and showcasing his raw talent – but it’s also loud and eclectic. In the cover image of the acclaimed album, Rosalía appears naked except for a motorcycle helmet. During her live show, she reveals it even more.