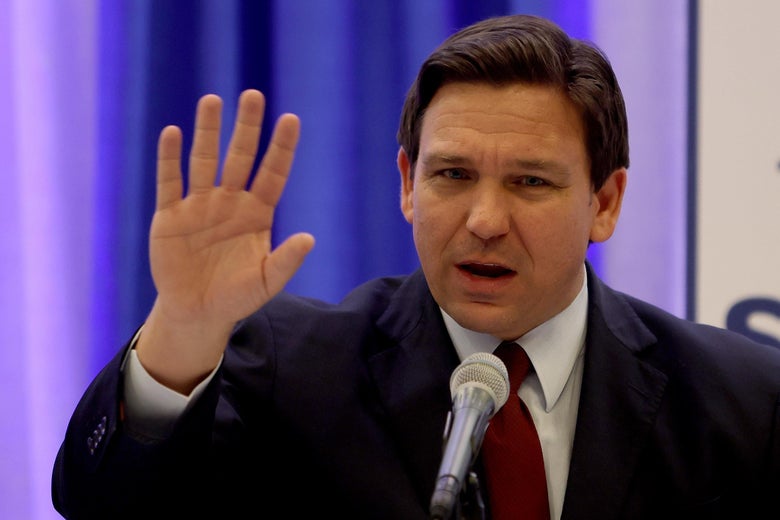 The Republicans’ war on critical race theory has also led to anti-gay censorship.

For decades, anti-gay activists have pushed their agenda by masking their homophobia for the sake of children’s innocence. But as gay Americans have demanded equal rights and gained visibility, these anti-gay sentiments have fallen out of favor in polite society. As a result, fanatics began to disguise their hatred of homosexuality in terms of religious freedom and “natural law”. Today, the anti-gay lobby has found a tantalizing new opportunity to continue its crusade: the right-wing war against critical race theory. Suddenly, Republican lawmakers are establishing speech codes for public schools, censoring students and teachers, and banning various educational materials. Homophobic activists have built on this campaign by reframing LGBTQ-related school talk as dangerous liberal propaganda.

In several Republican-run states, anti-gay crusaders are poised to succeed, reigniting a pernicious hatred that seemed to fade just a few years ago.

Whenever there is a moral panic involving children, homophobes see an opportunity.

The most notorious of these anti-gay gag orders is Florida’s “Don’t Say Gay” measure. The law project, HB 1557has already pass the State House of Representatives and is on the edge visiting the State Senate; Republican Governor Ron DeSantis has reported that he will sign it. HB 1557 prohibits “classroom teaching” about “sexual orientation or gender identity” from kindergarten through third grade, then prohibits such “teaching” from grades 4 through 12 if it “n ‘is not age or developmentally appropriate’.

These terms are not clearly defined and this ambiguity is intentional. As my colleague Christina Cauterucci explained, their intention is “to create a chilling effect, so that teachers and school administrators are too afraid to teach LGBTQ history, discuss relevant current events, or offer support for queer and trans students lest they run into a vaguely written law HB 1557 allows parents to take legal action against non-compliant schools and obtain damages, i.e. cash payment, plus attorney’s fees if prevailing.Like the Texas abortion ban, it creates a system of law enforcement to self-defense, relying on the threat of ruinous legal action to align its goals.

Florida isn’t alone in silencing LGBTQ-related discourse. There are at least 15 similar bills in eight states, and several go far beyond HB 1557. Oklahoma’s SB 1654 prohibits schools from using books that “have as their main subject the study of lesbian, gay, bisexual or transgender issues”. from Tennessee HB 800 would outlaw school materials “that promote, normalize, support, or address lesbian, gay, bisexual, or transgender (LGBT) issues or lifestyles.” Kansas’ HB 2662 prohibits any material that “represents” homosexuality – not gay sex, but the mere existence of same-sex couples. Any teacher who breaks the law could be fined and jailed.

Many of these anti-LGBTQ bills are touted as “parents’ rights” or “program transparency” measures. The reason is obvious. As PEN America has reported, such measures represent “a convergence between two distinct but related sets of actors: first, anti-LGBTQ+ activists, well-established but with limited success penetrating public schools; and second, the “anti-Critical Race Theory” movement. This anti-CRT campaign “incited the public to support radical censorship of classroom speech. For anti-LGBTQ+ activists, this is a unique opportunity, a chance to pass bills far more restrictive than anything the public would normally accept.

The groups pushing these bills view the discourse on race and LGBTQ people as part of the same larger evil. Heritage Foundation, DC’s conservative think tank, is lobbying against the two CRT (defined as virtually any discussion of race) and LGBTQ acceptance (which he calls an “ideology of sexual orientation and gender identity”) in schools. Family Policy Alliance, the lobbying arm of Focus on the Family, advocates against education about race and LGBTQ identities under the umbrella of protecting “parental rights.” The same goes for his Florida Chapterwho has mobilized in support Florida’s gag rule.

A registered lobbyist for HB 1557, Moms for Liberty, formed just two years ago. The group’s trajectory illustrates how these causes coalesced. Moms for Liberty first appeared on the scene to lobby against school mask mandates in 2020. It quickly morphed into a ‘parents’ rights’ organization and set its sights on censorship education, requiring that schools ban books depicting interracial marriage, Martin Luther King, Jr., and civil rights protests (allegedly for portraying the police in a negative light). Naturally, the group then aimed to LGBTQ-themed books, equating sensitive portrayals of gay youth with pornography. He even objected to a book about seahorses because it explained that the males carried the eggs.

The interests of anti-LGBTQ activists and anti-CRT activists intersect where it matters: Both groups want to control the information their children are exposed to in school by gagging educators and students. Our current moral panic is rooted in the fear — carefully cultivated by Republican lawmakers and conservative media — that schools are indoctrinating students with a dangerous, un-American “ideology.” They capture the pervasive parental concerns that cultural currents are dragging their children further out to sea and away from the shores of traditional morality. Just as some parents do not want their children to know about same-sex marriage, others I don’t want them to find out structural racism, Jim Crow, and slavery. Already, this movement is moving towards the censorship of all ideas that offend them, including the existence of Communism, sexism and atheism. (You can read an index of these bills here.)

On a podcast supporting HB 1557, Ben Shapiro said he would “always be a passionate advocate for the protection of small children from the predators of adults who wish to discuss controversial social issues with children.” This word – “predations”, which Shapiro has used many times – is the keystone of this whole debate. This reflects an angst that homosexuals who do not hide their sexuality attempt to brainwash and moleste children.

This extravagant and bigoted notion has deep roots. You see this assumption in the infamous 1961 short beware of the boys, which warned school children against predatory homosexuals and was produced in part by (of course) a school district. You see it in failure 1978 campaign ban gay teachers from California schools. You see it in Board of Education c. National Gay Task Force, a 1985 case in which the Supreme Court struck down an Oklahoma law prohibiting teachers from “encouraging or promoting” homosexuality. (The state cited the need to protect “student morals” and “traditional cultural values,” worrying about student “imitation” of gay teachers.) You see it in many of the ads supporting the proposal. 8, who affirmed that legal same-sex marriage would force educators indoctrinate children. (Slogan: “It has everything to do with schools.”) Now we see it in Florida, Tennessee, Kansas, Oklahoma – it’s a safe bet that a “Don’t Say Gay” bill will gain ground in all Republican-controlled state legislatures.

Whenever there is a moral panic involving children, homophobes see an opportunity. The CRT fracas offered them a chance to turn their cause into a much larger and more successful movement, giving it a huge boost in attention, money and political support. But there is nothing new in its underlying claims, nor in the bigotry that drives them. We are still trapped in the same debate about the humanity of homosexuals. And as usual, it is the youngest and most vulnerable among us who will pay the heaviest price.

Rosalía’s “MOTOMAMI” premiere on TikTok – Here’s how to watch