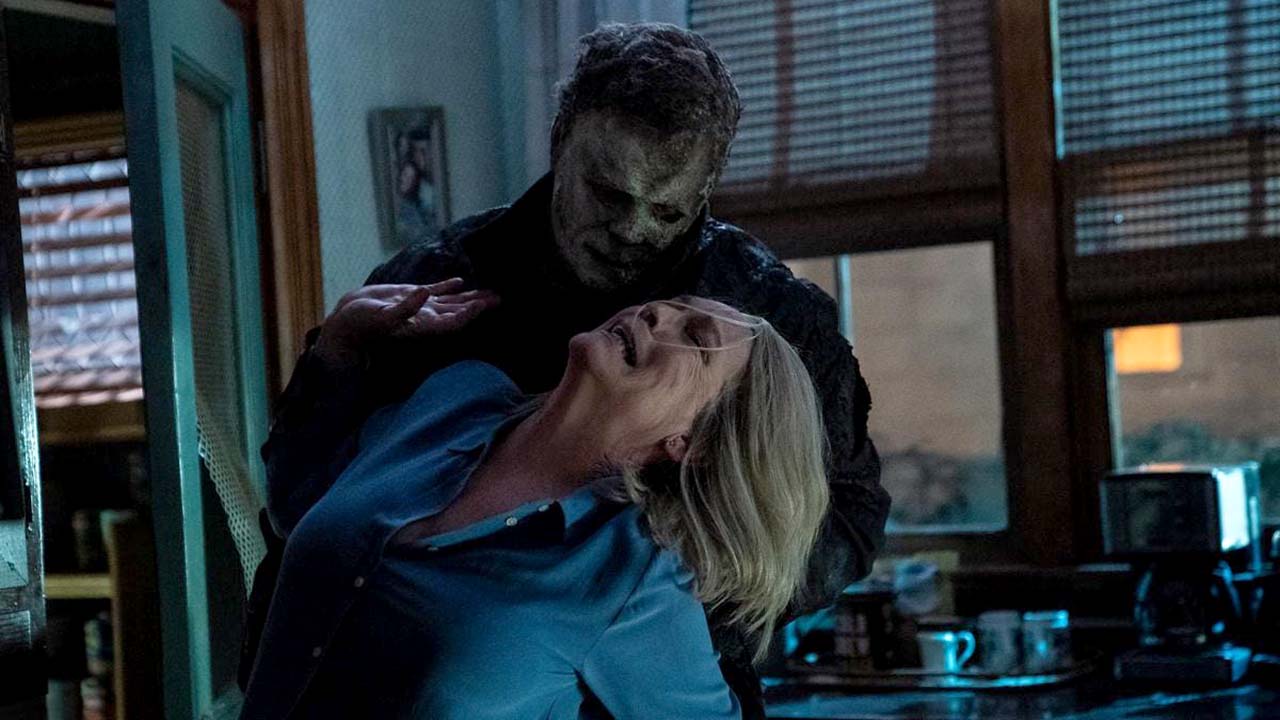 Scary Stories of the Season

Although the title “Halloween Ends” implies this will be the conclusion, John Carpenter teased that – if it makes enough money – there could be more Michael Myers. Speaking at Pennsylvania’s Steel City convention last August, Carpenter admitted he never envisioned his original film getting a sequel and that “the movie industry is ruled by money.”

In a surprise move, Universal sent this day and date to theaters and its Peacock streaming service. What most people also don’t realize is that longtime “Halloween” producer Moustapha Akkad had a clause in his contract that specifically forbade anyone from killing Michael Myers’ character. So Jason Blum of Blumhouse clarifies: “I never said it was the last ‘Halloween’ movie. This is OUR last “Halloween” movie. Legal rights have now reverted to Moustapha Akkad.

Still from Blumhouse, there is “The Visitor”, featuring a married couple – Robert (Finn Jones) and Maia (Jessica McNamee) returning to Maia’s childhood home. In the attic, Robert finds a portrait that looks exactly like him; curiously, he is only identified as “the visitor”. Still, nothing is as it seems as he goes on a hunt to find out why it seems like everyone in town already knows who he is and who the twin might be…on EPIX.

Moving on, there are also other tips for horror fans. Some of them will be heading straight to streaming while others will appear exclusively in theaters.

“Hocus Pocus 2” brings these three sisters back to life from the 17th century, played as they were in the 1993 cult classic by Kathy Najimy, Bette Midler and Sarah Jessica Parker. Directed by Anne Fletcher, this origin story about the Sanderson sisters finds them once again wreaking havoc in Salem, Massachusetts – streaming on Disney+.

Sosie Bacon, daughter of Kevin Bacon and Kyra Sedgwick, stars in “Smile”, a chilling story spurred on by a curse that finds the victims staring at a creepy smiley face before succumbing. She plays the role of a therapist at a mental hospital who begins to experience frightening events that she cannot explain. Paramount had originally planned to premiere it on Paramount+ but — because the test screenings were so successful — executives decided on a theatrical release before airing.

Do you remember Anne Rice’s “Interview with the Vampire”? with Tom Cruise and Brad Pitt? This was released in 1994. Set in New Orleans, a new version features Jacob Anderson (“Game of Thrones”) as Louis de Point du Lac. He summons journalist Daniel Molloy (Eric Bogosian) to record his exploits since being denounced by his cruel companion Lestat de Lioncourt (Sam Reid)… on AMC & AMC+.

“Pearl” by Ty West tells an origin story, the prequel to the slasher movie “X”. Once again, Mia Goth stars as the daughter of a feverish farmer with a penchant for murder and mayhem. There’s the same Texas farmhouse with its creaky yellow house, cavernous barn, and hungry alligator in the pond. Against the backdrop of the 1918 Spanish flu pandemic, Pearl is a sweet southern girl who bonds with the local cinema projectionist who introduces her to French pornography and tempts her to lead a more bohemian life.

Adapted from the novel by Grady Hendrix, “My Best Friend’s Exorcism” finds a teenage girl (Elsie Fisher) trying to decide whether her best friend is going through normal hormonal nightmares or full-blown demonic possession.

Winner of the Grand Jury Prize at the Sundance Film Festival, “Nanny” pivots on the exploitation of immigrants as an undocumented childcare provider is plagued by an unseen supernatural presence. Coming from Senegal to work for a wealthy couple in Manhattan, Aïcha prepares for the arrival of the son she left behind in West Africa.

Naomi Watts stars in ‘Goodnight Mom’ a remake of an Austrian horror movie in which twins begin to suspect that the woman who came back from the hospital with her face wrapped in bandages isn’t really their mother because her behavior has been bizarrely altered. Is she an impostor? It shows how the psychological horror can be magnified when you can’t see a person’s face. Distribution on Amazon.

Based on the work of bestselling author Christopher Pike, “The Midnight Club” is Netflix’s new 10-episode series in a hospice with a mysterious history. Eight residents gather every night at midnight to tell spooky tales and search for signs of the supernatural.

Jordan Peele and Keegan Michael Key Team Up Again in ‘Wendell & Wild’ to give voice to two demons who try to persuade a punk rock-loving teenager to help them get out of Hell and live their dreams in the Land of the Living. Streaming on Netflix.

“Don’t Look at the Demon”

In “Don’t Look at the Devil”, an American television crew of paranormal investigators visits the home of a couple who claim to have experienced inexplicable and threatening trouble. Fiona Dourif plays a troubled psychic who refuses to face what really happened when her first supernatural encounter left her sister dead.

From fantasy to reality – Netflix’s “Conversations with a Killer: The Jeffrey Dahmer Tapes” is a gruesome three-part series about Dahmer’s 17 innocent victims and how the investigation was affected by systematic racism and institutional failures in the police which allowed one of America’s most notorious serial killers to continue his killing spree in plain sight for over a decade.

And HBO is airing “The Vow: Part Two.” In the context of the federal lawsuit against Keith Raniere, his Inner Circle discusses the secret sex society, including NXIVM co-founder Nancy Salzman.

Susan Granger is a product of Hollywood. His natural father, S. Sylvan Simon, was a director and producer at MGM and Columbia Pictures. His adoptive father, Armand Deutsch, produced films at MGM

As a child, Susan appeared in films with Abbott & Costello, Red Skelton, Lucille Ball, Margaret O’Brien and Lassie. She attended Mills College in California, studied journalism with Pierre Salinger, and graduated from the University of Pennsylvania with highest honors in journalism.

During her adult life, Susan has been on radio and television as a film and theater presenter and critic, distributing her reviews and articles worldwide, including Video Librarian. She has appeared on American Movie Classics and Turner Classic Movies. In 2017, his book 150 timeless films was published by Hannacroix Creek Books.