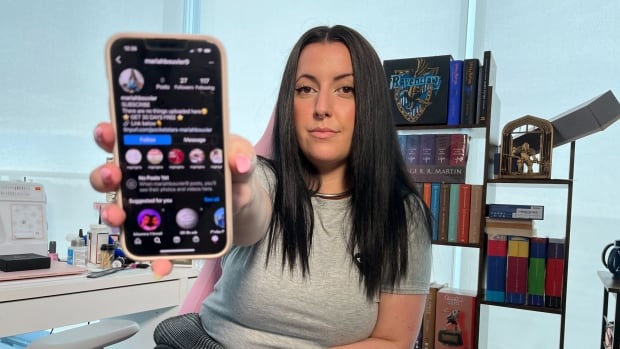 In the middle of a yoga class last March, Calgary resident Alina Leasenco said she noticed her phone was flooded with notifications.

She hadn’t posted any recent messages.

Curious, she unlocked it and found several messages from friends telling her to check Instagram.

Her photos and name had been used to create a second profile, stealing her likeness to advertise fake adult content in hopes of obtaining credit card information from duped subscribers.

Leasenco is one of many scam targets that not only steals a person’s identity, but turns their body into bait to defraud their subscribers.

She said her first duplicate profile was quickly taken down after it was reported, but she saw other people targeted in the same way.

“It happens all the time, it happens every day, I see someone say, ‘Hey, can you please report this account? It’s not me,'” Leasenco said.

A year later, and just days after her interview with CBC News to discuss that initial incident, she was targeted again.

Despite asking her friends and followers to report it, it took Calgary resident Mariah Bouvier nearly four weeks for Instagram to remove a fake profile that used her photos and name to advertise content. for adults.

“I reported it multiple times from my work account because my personal account had been banned from them, obviously,” Bouvier recalled.

“And they actually got back to me saying they didn’t see a problem with it.”

Bouvier received an automated message from Instagram telling him that their review team hadn’t been able to see the report, but that they found the account “probably doesn’t go against our community guidelines.”

“Having someone impersonate me when I had no say in it is detrimental.” Bouvier said.

“And luckily, I feel like I have a sense of humor that allows me to laugh about it, but some people don’t.”

“Pretending to be someone else on Instagram violates our Community Standards, and we remove fake accounts when we become aware of them,” a Meta spokesperson said.

“We know we can do more here, and we work hard to stop bad actors before they cause damage, and to keep our community safe.”

The spokesperson also noted that the impersonator accounts identified in CBC’s request had been removed.

The company adds that millions of accounts are blocked every day using artificial intelligence and machine learning to identify suspicious behavior without evaluating the content itself.

They say automated tools are used to flag bots that may be serving policy-violating content, including pornographic images.

When clicked, the link on Bouvier’s impostor account takes users to a Wix site instead of the featured platform, PocketStars.

Wix is ​​a website building platform that allows users to create free domains.

Bouvier contacted Wix, who she said quickly shut down the landing site.

Leasenco had contacted OnlyFans, believing that the profile with its images was legitimate.

The PocketStars and OnlyFans platforms each allow users to upload their own content. While PocketStars is specifically an adult website, OnlyFans allows a variety of content, including pornography.

“They indicated it wasn’t really their problem,” Leasenco said.

“They’re trying to take advantage of the fact that you have a relationship.”

Keenan said potential victims are more likely to open links and emails from people they think they know, a method also widely used in other scams.

“We see an awful lot of stuff where they say, well, we’re your preferred supplier and, you know, you have to send us a wire transfer or something,” Keenan said.

“So there’s nothing new about it, but it’s hurtful and I’m sure people feel very overwhelmed when their photos and personal information is misused.”

Bouvier and Leasenco recognize that their profiles are made public and realize that this makes their photos vulnerable to theft.

They each work in careers open to the public and use their social media platforms to grow their brands and have both chosen to prioritize their professional growth over the potential risk of stolen content.

Neither of them expected to be targeted like this.

“I felt very violated and I felt very angry because, yes, like I said, I put a lot of work into the images created by me and other artists, and that extremely upset,” Leasenco said.

As an actress and model, Leasenco’s face and likeness are immeasurably valuable to her career.

“I felt like my art was sexualized when that wasn’t a primary intention.”

Bouvier runs his own online business and regularly streams on Twitch with his partner.

She worries about the results people will see if they try to search for her real accounts online.

“People can search my name. This will be the second account that comes up and someone might not think so high or might put me in a different light.”

“Women have this age of post-feminism where they want to be sexually liberated and can post thirst traps for their friends or followers that are really cute,” Rudyck said.

“And then to see him being co-opted like this by a stranger on the internet is really shocking, and it says a lot about men’s right to women’s bodies and images.”

Bouvier, Leasenco and Rudyck agree that the profiles they have seen only target women.

While other scams may offer a free laptop as bait to follow a link, this fraud makes women themselves the merchandise.

Bouvier said she did not believe she would pose as a man.

“It didn’t happen to my partner, who is the face of the Twitch channel, but to me,” Bouvier said.

She said it was hard enough to exist in a male-dominated industry like Twitch without having objectified body images to scam followers.

“The patriarchal structure of our culture suggests that men have some claim or ownership over women’s bodies and sexuality,” Rudyck said.

“It’s a societal pattern that we see repeated over and over again, whether it’s with the theft of Instagram images, or it’s the way narratives around romance are portrayed in romantic comedies and that men can stalk and crawl on women.”

Impostor accounts even insisted on following the same connections that Leasenco and Bouvier have on Instagram.

This led to uncomfortable conversations with family members.

“My family, who aren’t necessarily in this country and don’t speak English, had seen these things and, you know, they didn’t contact me, but I had to contact them,” Leasenco said.

“It horrified her, and even more, of course, because, you know, it’s also a different culture,” Leasenco recalled of the conversation with her grandmother, during which she also been forced to explain what the OnlyFans platform is.

“She was very upset to hear that.”

Bouvier says her brother took her in stride, joking with her to let her know which sites not to visit.

Leasenco and Bouvier had to repeatedly explain that the profiles were falsified.

Rudyck says those conversations with family members and friends can be awkward.

But for those who notice a new profile that matches the scam, she says it’s important to start the conversation without judgment in case the profile is legit.

“Something like that where the person receiving the message knows it’s from a place where they want to protect the autonomy and safety of whoever is delivering the content,” Rudyck said.

“So if it’s a beloved niece or someone who’s a bit younger, just make sure they also know they can come to you if anything ever happens. .”

She notes that this scam not only exploits women posing as women, but the sex work industry as a whole.

“It’s also an exploitation of people who want to pay for sex work and seriously engage in this type of content and pay content creators what they’re worth.”

“The other thing I guess you could probably do is somehow watermark photos, so there are technical ways to keep track of where a photo came from.”

“More and more, your face is your password,” Keenan said. “I think in the future we will kind of hide our faces online for the simple reason that someone might use LinkedIn to gain access to our bank account.”

In Meta’s response, the spokesperson advised anyone who believes they have been targeted by a copycat to report the account and provide a photo of their government-issued ID to prove their identity to Instagram.

Virtual Sex: NFT Vibrators Now Exist: What Will Sex Be Like In The Metaverse? | science and technology