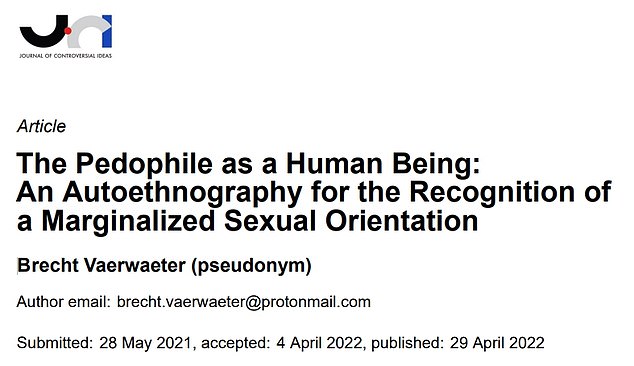 Researcher admits to being a PEDOPHILE in bizarre academic paper

A researcher has apparently admitted to being a pedophile and has pleaded for an end to the stigma of ‘people attracted to minors’.

Writing in an academic journal under a pseudonym, ‘Brecht Vaerwaeter’ detailed his experience of being attracted to young boys.

It graphically details several incidents of a sexual nature with children, such as bringing a 15-year-old into his tent where they sucked his finger and sneaking up on a sleeping 13-year-old while having a “painful” erection.

Mr Vaerwaeter argues that pedophilia should be recognized as a legitimate sexual orientation and that people like him should be accepted by society.

The Journal of Controversial Ideas, in which he published his controversial essay, is edited by academics from Oxford University and Princeton University in the United States, with an editorial board made up of dozens of academics eminent people from both countries.

Mr Vaerwaeter’s 10,000-word article was originally published in April, but only recently came to light after an article by feminist website Reduxx.

This follows scientific outrage earlier this month over another paper by a University of Manchester PhD student, who detailed how he masturbated in front of children’s drawings.

Should the pedophile be more accepted by society? This is the controversial argument written by a scientist in an academic journal

In the article itself, Mr Vaerwaeter says he first realized he was attracted to children when he was 17 and living in Belgium in the 1990s.

“During gym class, I enjoyed the smooth calves of the second grade boys,” he wrote.

He states that he later volunteered to supervise young boys at a school retreat where he sexually fantasized about them.

Worse still, when he was 19, and therefore an adult, he joined a summer youth club and began to develop a relationship with young boys.

One, Cedric, was 13 at the time, with Mr Vaerwaeter telling how desperate he was to touch the child at night.

“I carefully crept a little closer. We were practically in a spoon position,” he said.

He described how he experienced a “prolonged, ultimately even painful erection”, during the incident, which he said was “very unwelcome and inappropriate”.

Later that summer, Mr Vaerwaeter happily accepted the youngster’s offer to spend the night in his tent.

“As I had hoped, it wasn’t just about sleeping, because he wasn’t averse to some mutual wrestling and tickling from time to time,” he said.

Another interaction, this time with Jeroen, a 15-year-old boy who has crossed even more ethical boundaries.

“That evening in the tent he asked me if there was a room next to me, because he would like to come and sleep there,” recalls Mr Vaerwaeter.

“He grabbed my hand and pressed it to his face.

“Overwhelmed with emotion, I started stroking his face, then he opened his mouth a bit and sucked on my finger for a while.

In his article titled “The Pedophile as Human Being: An Autoethnography for the Recognition of a Marginalized Sexual Orientation”, Mr. Vaerwaeter stated that he had never had sex with a minor, nor that he encouraged her.

However, he advocates for wider acceptance of pedophiles in society.

“I think pedophilia should be explicitly recognized as a sexual orientation by anyone who deals with gender identity issues in any way,” he said.

Mr Vaerwaeter added that pedophiles deserve “recognition and attention to their emotional issues”.

“To reject pedophilia as a sexual orientation is unethical and intellectually unfair,” he said.

However, he drew the line of defense for “members of the pedophile community” who have sex with children or use child pornography.

But Mr Vaerwaeter added that more needed to be done to help the “tens of thousands of young people” who have “paedophile sentiments”.

He looked to the LGBTQ+ community to provide a base for this movement.

“Pedophiles are a particular sexual minority,” Mr. Vaerwaeter wrote. ‘[They] face the same issues of stigma, discrimination and social isolation as other members of the LGBT community, albeit to a greater degree.

“If the community is to be inclusive, it must live up to the meaning of the ‘+’ in its acronym.”

Mr Vaerwaeter claimed that greater acceptance would both help pedophiles themselves by offering mental support and potentially prevent child abuse.

The increased acceptance of pedophilia has already been touted by some experts.

Some groups have been mired in controversy, such as the Pedophile Information Exchange (PIE), a British organization that campaigned to lower the age of consent in the 1980s.

Several Labor politicians were linked to the PIE campaign because of its affiliation with the National Civil Liberties Council.

But others have argued that making pedophilia more socially acceptable would encourage people sexually attracted to children to come forward and seek mental health support.

Mr Vaerwaeter details his own struggles with ‘isolation’, unable to discuss his ‘sexuality’.

“I continue to find it distressing and problematic that in the kind of environment I work in, which is populated by open-minded, highly educated people, I can’t be open about my own sexuality,” he said. declared.

The Journal of Controversial Ideas is edited by Professor Jeff McMahan, expert in moral philosophy at Oxford University, and Professor Peter Singer, expert in bioethics at Princeton University.

They created the journal in response to “cancellation culture” and allow scholars to publish “offensive, immoral or dangerous” articles under a false name if they wish.

The journal has rules, stating that it would not publish information on the creation of biological weapons for example, and said that the final decision would be up to the editors.

“What does and does not count as dangerous will be determined by the editors, in consultation with the editorial board and, if necessary, outside experts, on a case-by-case basis,” their publication policy states.

The newspaper has been contacted to comment on the publication of Mr Vaerwaeter’s article.

Earlier this month Karl Andersson, a PhD student at the University of Manchester, came under fire from academics and the public for posting an article detailing how he masturbated for three months in Japanese comic strips featuring young boys.

Publishing the article in the journal Qualitative Research, Andersson said he was researching a genus known as shota, which he describes with characteristic drawings of “characters of young boys in a cute or, more often, sexually explicit way”.

He wrote that after “hitting a wall” in his studies of people who like this genre, he decided to interact with the subject in a more practical way.

The editors of Qualitative Research have since retracted the article following an investigation and acknowledged the “harm” caused by its publication.

The University of Manchester has launched its own investigation and while it is ongoing it says it has suspended the student involved as a ‘precautionary measure’, although Mr Andersson is still listed as a researcher on its website .

A statement from the University also said Greater Manchester Police had opened an investigation into the case and were assisting.

Shilpa Shetty looks in pain as she arrives with a broken leg in a wheelchair at the event; The video goes viral