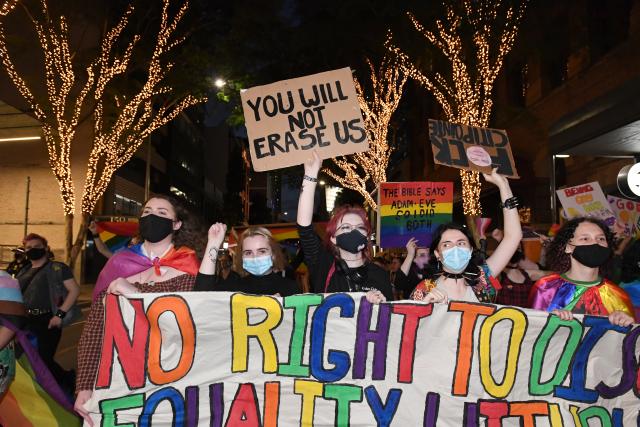 The world is full of contradictions.

To live a truly free life, you must exercise discipline in earning a living and supporting yourself. To be healthy, you need to make your body feel pain through exercise. To bring peace and security to a nation, it is better to prepare for war.

And to live in a harmonious society that gets along, we must respect people’s right to discriminate with whom they associate. Ironically, a tolerance for division creates unity, or in other words, good fences make good neighbors.

Debate around the Religious Discrimination Bill has become linked to emotional and charged debates over sexuality, gender and morality. What is missing is that at the heart of the debate is the protection of the fundamental freedom to associate with like-minded people within a community.

It happens all the time in less emotionally charged areas. I can choose my groups of friends, whether I join a union or a sports club. In all these cases, these organizations can discriminate against and exclude other people who do not share the beliefs and values ​​of others.

It is the same with religion. A long fight for freedom was the freedom to establish one’s own religion. By joining a religious group, you almost always exclude those who do not share the values ​​and beliefs of that religion.

Not so long ago violent wars broke out in Western countries over this right. The Thirty Years’ War of the 17th century began as a conflict over whether people could freely choose to practice Catholic or Protestant religions. It was perhaps the most destructive war in human history, with parts of Germany experiencing population declines of more than 50%.

The conclusion of this war led to the establishment of national sovereignty and eventually to the widely accepted doctrine of freedom of religion.

This freedom has served Western nations well, but we are falling back into a period where we do not respect the boundaries between different groups and this only exacerbates division in our community.

Last month, a Christian school in Brisbane, Citipointe Christian College, asked parents to sign an “enrolment agreement”. This contract required parents to agree, among other things, that the school recognize a child’s sex at birth and that “sexual immorality (including, but not limited to, adultery, fornication, homosexual acts, bisexual acts, bestiality, incest, pedophilia and pornography) is sinful and offensive to God and destructive to human relationships and society.

This contract caused outrage and directly led to proposed amendments to the Sex Discrimination Act that would prevent a school from expelling a student because of their sexual orientation or gender identity.

While I don’t think a school should expel a student solely because of their sexuality or gender, I do think schools should have the right to set standards for their students. My wife and I send our children to local Catholic schools, in part because the schools have strict standards for dress, behavior and conduct. If a child wantonly and repeatedly violates these standards of behavior, the school should be free to expel the child given the disruption the misbehavior creates for other students.

We need to be careful if amendments to our discrimination laws still allow discrimination on student behavior at school. I think schools in general (but not the schools my children attend) have become too lax on discipline, and we are failing young children by not setting enough boundaries and strict boundaries in modern life.

An “anything goes” approach to school does not properly prepare children for the harsh realities of life where you cannot simply imagine your path to happiness. We should have laws to protect the right of parents to send their children to schools that impose such discipline.