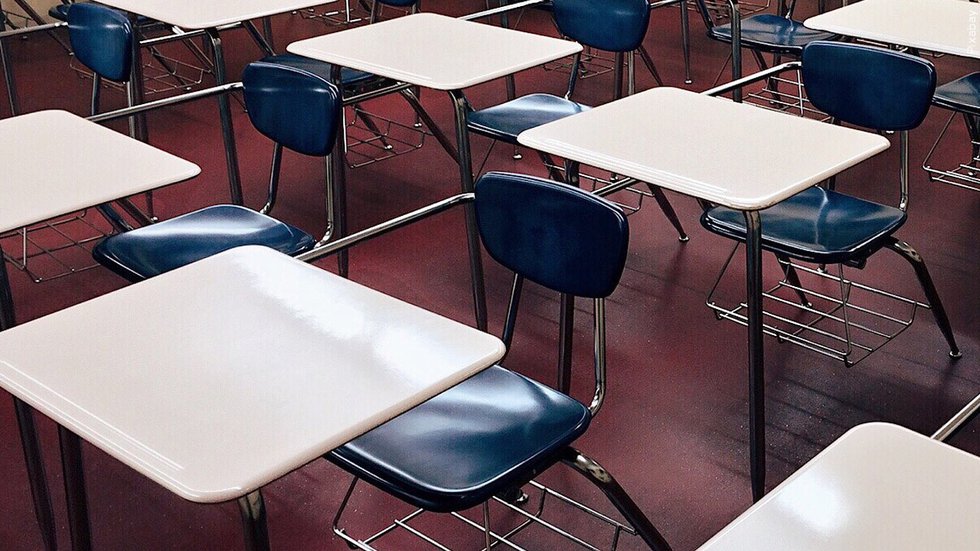 LINCOLN, Neb. (Flatwater Free Press) – On a Saturday in March, Stephanie Nantkes walked into the Civic Center in downtown Seward to find a few dozen people gathered in the meeting room downstairs, their heads bowed in prayer. She found Kirk Penner, a candidate for re-election to the Nebraska State Board of Education. She found Jessie Bremer and Jacob Bierbaum, candidates for the local school board.

She found a table of fellow teachers. Some have retired, like her. Some are still there: correcting essays, revising lesson plans and organizing field trips.

Together they waited for the debut of a new movie called “The Mind Polluters” – a movie that would eventually be publicly screened by Nebraska for Founders’ Values ​​and the Protect Nebraska Children Coalition about two dozen times across the state. , from Omaha to Gordon.

The lights were dim. The projector turned on.

“Now here’s the big question: what if I told you that all of these things were happening to your child in his classroom?”

Nantkes watched as speakers leveled accusations against “government school systems” – against teachers like her, she felt.

Months later, Nantkes, mother of former ACLU of Nebraska director Danielle Conrad, struggled to express the depths of her bewilderment.

“A horror movie,” she called it.

“How crazy is that? she asked. “There is not a single fact behind what they were saying.”

She hadn’t spent 40 years teaching in Nebraska public schools and had served two terms on the Seward school board only to see her continued life portrayed as the work of the Antichrist.

“And that’s the right definition…”, insists the author Alex Newman towards the end of the film. “So parents, you have an obligation as a Christian to remove these children from this school.”

When the film ended and Penner stood up to speak, Nantkes broke down.

She continued until the hosts tried – and failed – to get her out of the building. She challenged them to call the police. They backed off.

“They were telling people lies about what I’ve loved all my life,” she says. “And I will go down to fight for it.”

Leaders of the Nebraskas for Founders’ Values ​​and the Protect Nebraska Children Coalition declined interview requests for this story, as did Nebraska Board of Education member Penner and state board candidate Elizabeth Tegtmeier, Marni Hodgen and Sherry Jones, who were approved by the PNCC and attended a screening of the film.

“Any statements attributed to PNCC or myself will be disavowed,” wrote Sue Greenwald, a retired pediatrician and member of the Protect Nebraska Children Coalition. “If you want to talk about the movie, I suggest you talk to the producers.”

“A real revelation,” he said. A film that “says a lot about what’s really going on in our school districts here.”

“The Mind Polluters” is the second feature film produced by the Archers. The film alleges that “public schools” are “preparing” children through programs such as comprehensive sex education and social-emotional learning, in addition to what the speakers call pornographic children’s books.

“Overcoming children’s natural inhibitions is the goal of both the sexual predator and the sex educator,” says Amber Archer. “Breaking down the God-given barriers that children have towards sexual content and behavior is the key: the key to manipulation and ultimately enslavement…”

The film does not interview any teachers, administrators, academics, or experts in public health or child psychological development.

Both agree that “The Mind Polluters” has no basis in reality.

“This movie is pure propaganda,” NSEA President Jenni Benson wrote in an email.

Unlike the couple’s first film – about George Klopfer, a disgraced Indiana doctor and abortion provider – “The Mind Polluters” has been banned from release on Amazon. (Amazon could not be reached for comment). It costs $24.99 to rent on Vimeo.

The Nebraskans for Founders’ Values ​​(whose director, Mark Bonkiewicz, also stars in the film) and the Protect Nebraska Children Coalition began co-screening “The Mind Polluters” at churches, libraries and community centers this spring. , soon after the Nebraska Board of Education voted to postpone the state’s first-ever health education standards indefinitely.

Nominees from state and local school boards endorsed by the groups appeared as guest speakers at these events.

News of the “mind polluters” spread quickly on social media and spilled into local school board meetings.

Amanda Ripley, a Lincoln nurse and mother of two, streamed the film online. She then publicly addressed the Lincoln Board of Education, confident that the state’s proposed health standards would soon be challenged.

“It would be almost negligent of anyone to vote yes or no on the proposed health standards without seeing this very comprehensive and well-researched documentary,” she told the school board in February.

In a follow-up interview, Ripley said she hadn’t personally seen any of the grooming activities alleged in “Mind Polluters.” She called her children’s public school teachers “lovely people” and said she didn’t host a screening of the film “because it seems super extreme for Lincoln, Nebraska.”

“It seems… to paint teachers in a bad light,” she said. “So if I was a teacher, would I be happy about it?” No. But then prove yourself. Prove that you are better and that you can be trusted with our children…”

Jespersen of the Nebraska Department of Education said there was no evidence to support the film’s accusations. He said Nebraska recently made headlines when similar “baseless allegations” were aired in the Legislature.

Repeating a rumor that spread from the PNCC’s Facebook page, Senator Bruce Bostelman of Brainard claimed that public schools were providing litter boxes for “furs,” or children identifying as cats. Several school districts have discredited the rumor. Bostelman apologized.

“If the parents really believe there’s something going on, it needs to be investigated. And if you think the administration is pushing it, then the Department of Education should get involved,” Jespersen said. we don’t have those claims.”

Teachers are the biggest reporters of child abuse each year in Nebraska, he said.

If parents are morally opposed to any part of the program, they can usually withdraw their child, he said. If they think the material is inappropriate, they can file a notice with the school board and district for review.

“But we are just not aware of the existence of these events,” he said.

Although misleading, the film can have power because, in many ways, the United States has been transformed. According to a recent Gallup poll, 7.1% of American adults now identify as LGBT, nearly twice as many as a decade ago. The number of LGBT teenagers is on the rise. The country’s multiracial population is growing at an unprecedented rate. The percentage of white Americans is declining, as is the percentage of self-identifying Christians.

“The world is becoming a scary place for many because it’s changing,” said Rita Bennett, former president of the Lincoln Education Association, which opposes the documentary.

Brady, a candidate for the Learning Community Coordinating Council, agrees that things are changing. He said schools are pushing for this change.

He said lessons on gender and sexuality taught in schools are often inappropriate. Any knowledge about sex should be taught by parents, he said.

Citing ‘The Mind Polluters’ as evidence, he said schools teach children that it’s okay to have sex with adults.

“The big thing they always say is ‘No means no and yes means yes,'” Brady said. “They tell a young child that it’s okay for them to give permission to have sex, even to older people.”

Jill Brown, a professor at Creighton University who teaches “The Psychology of Gender,” testified before the Legislature’s Education Committee backing the proposed health standards in February.

She said ‘Mind Polluters’ does a disservice to the ‘real work’ of preventing sexual abuse, which numerous studies have shown can be significantly reduced when comprehensive sex education is taught in schools.

Many claims made in the film are refuted by current research.

The film says that “every cell in your body bears witness to whether you are male or female”. According to a United Nations report, up to 1.7% of the world’s population is born with intersex traits.

The film says transgender is the result of trauma, confusion, or fantasy. But many studies have shown otherwise.

The film says that children’s “natural aversion” to sex will prevent abuse. But the US government reports that nearly one in four girls and one in 13 boys experience sexual abuse each year.

After the “Mind Polluters” program ended in Seward, Nantkes and other teachers from his table gathered outside the Civic Center. They were shocked. Angry. One later compared it to riding a roller coaster. “Your back is against the wall, and they pull you out, and you wobble like, what just happened here?”

But they were also filled with conviction. All, Nantkes said, are “determined” to condemn the flow of disinformation.

It’s a frustration shared by the Nebraska Department of Education.

“People see movies like this and they wonder why teachers are struggling right now. It certainly helps,” Jespersen said. “With everything we ask of teachers, we should celebrate them, not use baseless allegations to bring them down.”

Bettie Page, the “queen of pin-ups” of the 1950s, will receive a historic mark in Nashville

From manga to politics – Book and Film Globe