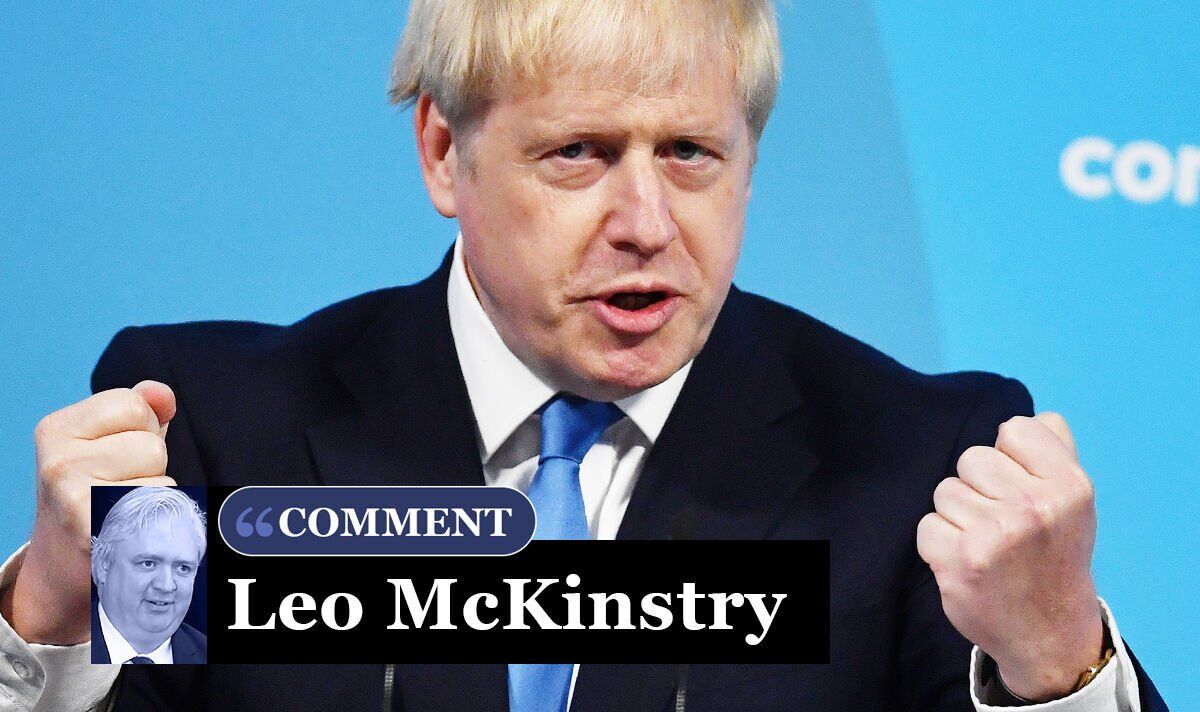 Next week UK could be torn apart – that’s how high the stakes are, says LEO McKINSTRY | Leo McKinstry | Columnists | Comment

Next week’s election is the most important in years, determining much more than the political makeup of town halls in Britain and the devolved Assembly in Northern Ireland.

In truth, it’s no exaggeration to say that they could settle not just the fate of Boris Johnson’s prime minister, but the very existence of the UK in its current form. The competitions come at a difficult time for Ulster Tories and Unionists. Despite his effective leadership on Ukraine, the Prime Minister has been beaten by Partygate and the worsening cost of living crisis, while further damage has been inflicted on his party by the latest sordid scandals, including including the allegation that a Tory MP openly watched pornography on his mobile phone in the Commons.

Meanwhile, across the Irish Sea, the Unionists, traditional allies of the Conservatives, trail Republicans Sinn Fein far behind in the polls. Since the creation of the Northern Irish state in 1921, Unionists have been the dominant force in the landscape there. That could be about to change.

“The Prime Minister has been beaten by Partygate and the worsening cost of living crisis” (Image: Getty)

If the Tories perform poorly – and their central office has warned they could lose more than 800 council seats – Johnson will come under heavy pressure. A significant number of his MPs, who have held back from moving against him so as not to undermine the candidates, would likely submit letters of no confidence in him, making a leadership vote inevitable.

“The concert is over,” said respected backbench MP Steve Baker last week, and those words could be translated into reality if the Tories take a beating.

If Sinn Fein emerges as the largest party in Northern Ireland and their leader Michelle O’Neill then takes over as Prime Minister at Stormont, then the union begins to become unsustainable. Some might shudder at this result, but in a democracy, the will of the people must be paramount.

Yet it is likely that in neither case will the outcome be clear.

Almost three decades ago, Labor under Tony Blair enjoyed a lead of up to 30%. Yesterday’s latest survey put Labor just six points clear, nothing like a dominant position in the face of a beleaguered government.

In such circumstances, Johnson will be injured but will survive, especially since there is no obvious replacement for him. In Ulster, even if Sinn Fein triumphs as the biggest party, they are unlikely to get more than a quarter of the total province-wide vote, not enough to start an immediate push for unity. . The Democratic Unionists, as the second party, will almost certainly refuse to enter a power-sharing administration with Sinn Fein, so the Good Friday deal will be suspended, London will temporarily take charge and tense paralysis will prevail. – the default mode for Northern Irish governance since the early 1970s.

Some commentators will no doubt complain about the uncertainties produced by next week’s elections. But confusion, contradictions and compromises are part of the richness of democracy.

No society is ever weakened by holding politicians to account through the ballot box.

The seafront tower puts skyscrapers in the shade

Driving regularly to London from Kent, I never cease to be amazed at how quickly and to what extent the capital’s skyline is changing.

But, for sheer magnificence, none of the new skyscrapers can match perhaps the most extraordinary structure ever built in Britain: the New Brighton Tower near Birkenhead.

Erected in 1898, this striking edifice featured a beautiful steel spire, similar to the Eiffel Tower, emerging from a vast Gothic building set in extensive landscaped gardens by the sea.

Unfortunately, it was demolished after the First World War because its owners were reluctant to pay for its upkeep. It now lives on only as a magical image in photographs, but perhaps a public-minded billionaire could reconstruct a version of it in all its majestic, nostalgic glory.

There’s no place for shyness in the fight for survival

Foreign Minister Liz Truss has spoken forcefully of the need to expel Russia from “all of Ukraine” and build up the military capacity of the defenders. She is quite right. For too long, lethal Western aid to the heroic Ukrainian resistance has been inhibited by fear of VLADIMIR Putin’s potential reaction.

But the Russian tyrant must ultimately be defeated, and it will be done through resolve rather than timidity. We should provide all possible military support, not only in missile systems, but also in tanks and planes.

A war for survival is underway. Our leaders should no longer cling to the semantic niceties of declaring that certain equipment is “offensive” and therefore cannot be provided because it might provoke Putin.

The world’s richest man, Elon Musk, has just bought social media platform Twitter for £35billion – and the left is having a steam fit. Amid growing hysteria, progressive politicians and pundits are touting Musk’s takeover as a threat to democracy and a license for hate speech.

But their position is ridiculously dishonest. Musk is all about freedom, not control, and that’s really what terrifies his opponents. For years, the left has used Twitter as a gigantic instrument of indoctrination and censorship, even banishing Donald Trump despite his 88 million followers.

Now, thanks to Musk, the ugly, Orwellian era of thoughtcrimes is coming to an end. Public discourse will only be better for the arrival of a new spirit of openness.

Speaking about protecting the Queen and the importance of therapy, Prince Harry sounds like a cross between a mafia don and a new age hippie. What a contrast between his gloomy narcissism and the serene restraint of the Duchess of Cambridge, right, who could teach her brother-in-law a few things about duty and service.

As she showed this week at ANZAC Day engagements and a joint visit with Princess Anne to two of the Royal Medical Colleges, she brings cheers wherever she goes in Britain. More and more, it only causes frustration, friction and fatigue.

The 40th anniversary of Argentina’s invasion of the Falklands has inspired fascinating commentary, none better than the Apple Battleground: The Falklands War podcast. Historians Saul David and Patrick Bishop bring the conflict to life in their fascinating series.

From intelligence failures to the sinking of the Belgrano, it provides captivating listening and inspires admiration for this remarkable British victory.

Recent images of Vladimir Putin show him with a limp, shaking hand, an indicator that he may have Parkinson’s disease. Coincidentally, wartime images have just been unearthed of Adolf Hitler with the same features.

Parkinson’s disease, it seems, is the disease of choice for deranged, bloodthirsty dictators, although having the disease myself, I generally feel tired rather than tyrannical, achy rather than autocratic .

Prepare your crotch: the necrosexual has his own comic