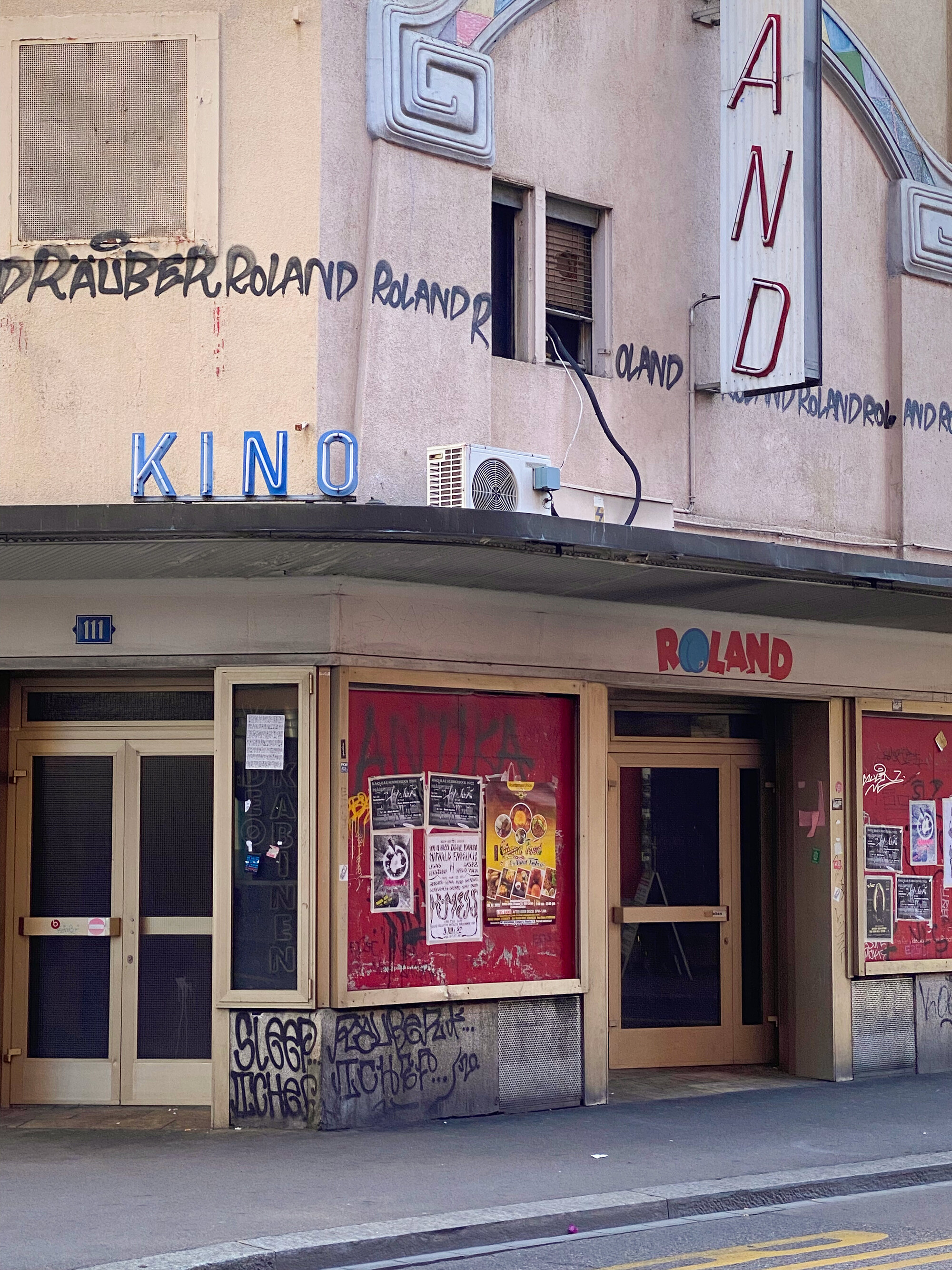 The Kino Roland is closing its doors. As a sex cinema for more than 40 years, it provided pornographic material until recently and thus completes the range of sex services on Zürich’s Langstrasse. It has been a mediating institution within the city, an institution that modulates and regulates the contemporary sexual subject through its semio-technical government. Its bricks, neon signs, and murals were tasked with reproducing the biopolitical norm of heteronormative patriarchy, inducing sexual arousal in male viewers while exposing the disobedient nature of sexual desires.

In search of possible locations for the next Swiss national exhibition Nexpo, we explore places of change and look for the new in the existing. Driven by the question “How do we live together in the 21st century?”, the collaboration with Querformat starts from the idea that space and sexuality are deeply entangled and intertwined. The emptiness of Sexkino Roland marks a turning point while opening up to various speculations and potentialities. The old cinema will be the subject of an investigation. It becomes the starting point for a discussion on how corporeality is negotiated in urban and public space.

For one last time, we invite you to inhabit the void of Sexkino Roland with us.

However, what happens in the darkroom could have been more complex than watching and jerking off. Random encounters between pleasure-seeking men grew out of the need to share a physical space to watch porn. Samuel Delany has written about his experiences dating as a black gay man in New York’s 42nd Street sex cinemas, just before they were demolished following the Times Square zoning plan. These spaces fostered cross-class and mixed-race social contacts in the form of aromatic intimacy. The complex social network that surrounds them has stabilized different communities while maintaining their heterogeneity. Four years after the book’s publication, the newspaper “Neue Zürcher Zeitung” reported that eight immigrant sex workers had been arrested for providing sexual services at Walche, another Sexkino in Zurich run by the company that operates Roland.

It is perhaps no coincidence that the closure of Sexkino Roland overlaps with a larger and ongoing process of gentrification at work in Langstrasse. Among Zürich’s sex cinemas, “Stüssihof” has already been converted into a children’s cinema in 2014, while “Sternen Oerlikon” has become a gastronomic place, imagined as a meeting place for “the local community”. Gentrification goes hand in hand with the disappearance of sex in the public space. The transgressive character of porn mentioned above is in direct contradiction to the process of urban homogenization. As the collective “Dangerous Bedfellows” asserts, The battle over sex in public is “also about real estate and big business”. As they pointed out, “to restrict sexual expression in public space is to artificially inflate property values, to ‘gentrify’ some neighborhoods while turning others into commercial dumping grounds, and to destroy the sexual culture that residents and tourists have built – and governments have fought for – for decades.” When gentrification arrives, sexual and uncomfortable content is replaced by family entertainment. The foundations of the pharmacopornographic regime must remain underground, either in the urban depths or in the cybernetic depths.

The closure of the Kino Roland and the current state of abandonment of the building at the same time open up a void in the public space of the city. No longer a potential cruise interior, nor a physical place that supports the biopolitics of pharmacopornographic society, it leaves a void full of potential, ready to be inhabited one last time.

A few years ago, Paul B. Preciado gave a speech before the Ecole de la cause Freudienne, announcing a “period of unprecedented historical importance”, when “the epistemology of sex, gender and difference sex is changing”. . Sexkino Roland could be the mark of a collapsing epistemology, and the building could mutate alongside it, thus marking the passage from sex, gender and sexual difference to an infinity of body differences, unidentified desires and unidentifiable.

Faster than an erection: October 21, 6–8 p.m.
Lecture by Reba Maybury and Cassandra Troyan

9 things to do after finishing Splatoon 3