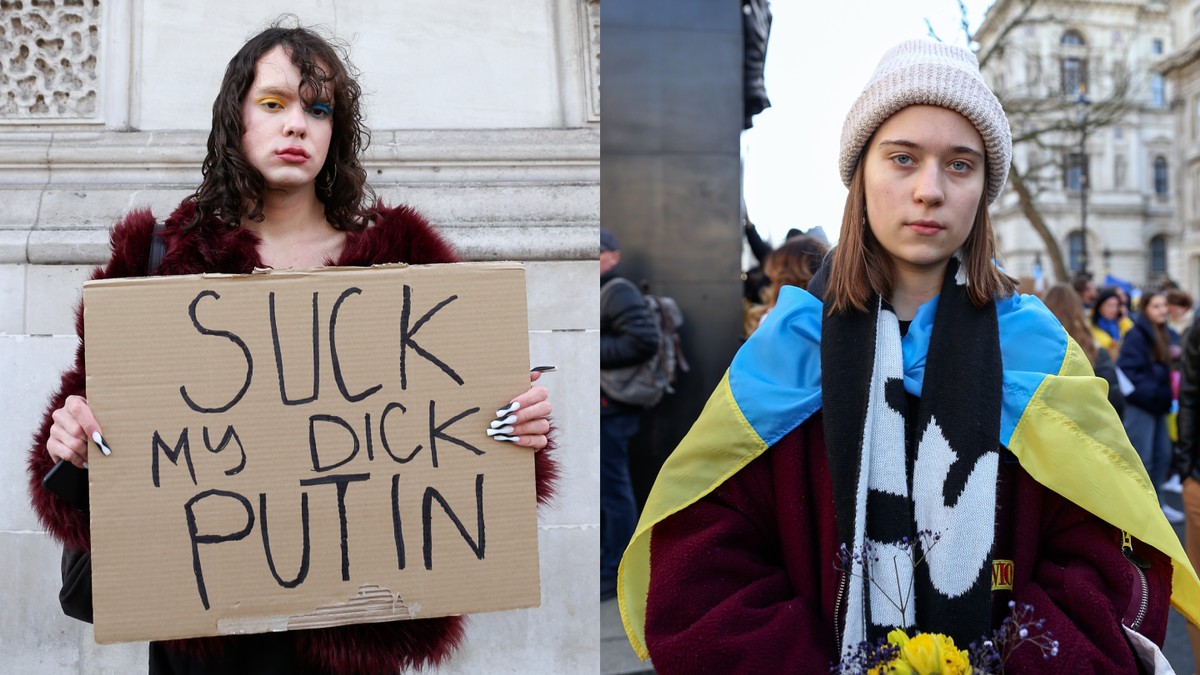 As Russia continues its invasion of Ukraine, LGBTQ Ukrainians were among those who joined anti-war protests taking place around the world over the weekend. Many still have family and friends in the beleaguered country and are anxious and afraid of the consequences if the Putin-led military assault succeeds, especially when it comes to LGBTQ rights.

In 2013, Russia passed a law known as the “gay propaganda” law, effectively cracking down on LGBTQ representation in the media. In 2020, more than 30 people were arrested for organizing protests in support of feminist and LGBTQ activist Julia Tsvetkova, who was accused by police of posting pornography on her Facebook page. Russia has been ranked as one of the worst places to be queer in Europe by ILGA-Europe, an advocacy group for lesbian, gay, bisexual, trans and intersex people.

Although progress for LGBTQ people in Ukraine remains slow and incremental, there have been some promising developments. Although equal marriage is still banned, Parliament passed a law banning discrimination in the workplace in 2015. In 2021, the annual Pride Parade – the March for Equality – attracted 7,000 participants and, unlike its early years, was untroubled by violent counter-protests or far-right thugs.

Bex Wade came to the protest in London on Saturday to speak to LGBTQ Ukrainians about their fears and concerns following the invasion.

I am a trans woman, my mother and my father are from Ukraine. I feel very unsettled and very uncomfortable right now because of the situation. My friends from the LGBTQI+ community in Ukraine are very stressed right now. They are very afraid.

I have a few friends in Kyiv and they really can’t live in peace right now. They are afraid that one day they just won’t be able to wake up. Yesterday my friend from Kyiv said she was very scared as this might be her last night. People are doing their best to survive right now.

Russia has very violent rules and policy towards homosexuals. If Putin – I don’t mean it’s Russia, it’s all Putin – affects Ukrainians, I’m afraid they too will suffer from increased violence, homophobia and transphobia .

What is happening in Ukraine right now is just terrible. I have family in Kiev – my father is there and he is very old. I was last in Ukraine in 2013; I am a refugee. I came to the UK to seek asylum as I was openly gay in my country. I had to move here because I couldn’t work safely and I couldn’t go out safely. If you’re openly gay, you’re under a lot of pressure [in Ukraine].

Now, however, for those out there, it’s hardly about sexuality or gender. For now, it’s about saving your [own] the life. People are trying to move towards the villages to hide from the rockets. I am ready to host people here in London, probably three or four people. It’s a very bad situation from what I can tell.

Part of my family comes from Crimea, [which] was annexed and occupied by Russia. If Russia’s intention is to occupy Ukraine and make [it] some kind of secondary state or part of Russia, it’s going to be absolutely devastating and just plain terrible for the queer community in Ukraine. From what I’ve seen [myself in Ukraine] and people I talk to, the gay and queer community out there is ringing now [more] progressive in terms of certain rights, with parties that have started to take place in the last two years and people who are not afraid to express their identity.

Of course, compared to Russia, we always had the impression that Ukraine was somehow a step forward. But now, if the war continues and Ukraine becomes part of Russia, then everything will be terrible. Queer rights are going to be taken away even more.

[LGBTQ people in Russia] cannot express themselves and the number of safe spaces is very limited. You cannot openly tell your family or friends who you are, because you always live in fear and suppress what is part of you.

As a queer Ukrainian, I’m scared not only of being queer, but of the whole situation that’s going on. However, I feel very supported. Everyone sends me messages and lets me know that they are offering their help no matter what, so I feel very proud and safe to be here [in the UK] – but I am also very ashamed that I cannot be in Ukraine and help.

I talked to my gay friends there. They are safe for now, but of course if Russia were to move forward there would be a huge amount of homophobia towards people. Currently, Ukraine – especially Kiev – is quite progressive and I would say relatively tolerant, but the fear is that Russia and its [anti-LGBTQ] mentality that affects us all in Ukraine.