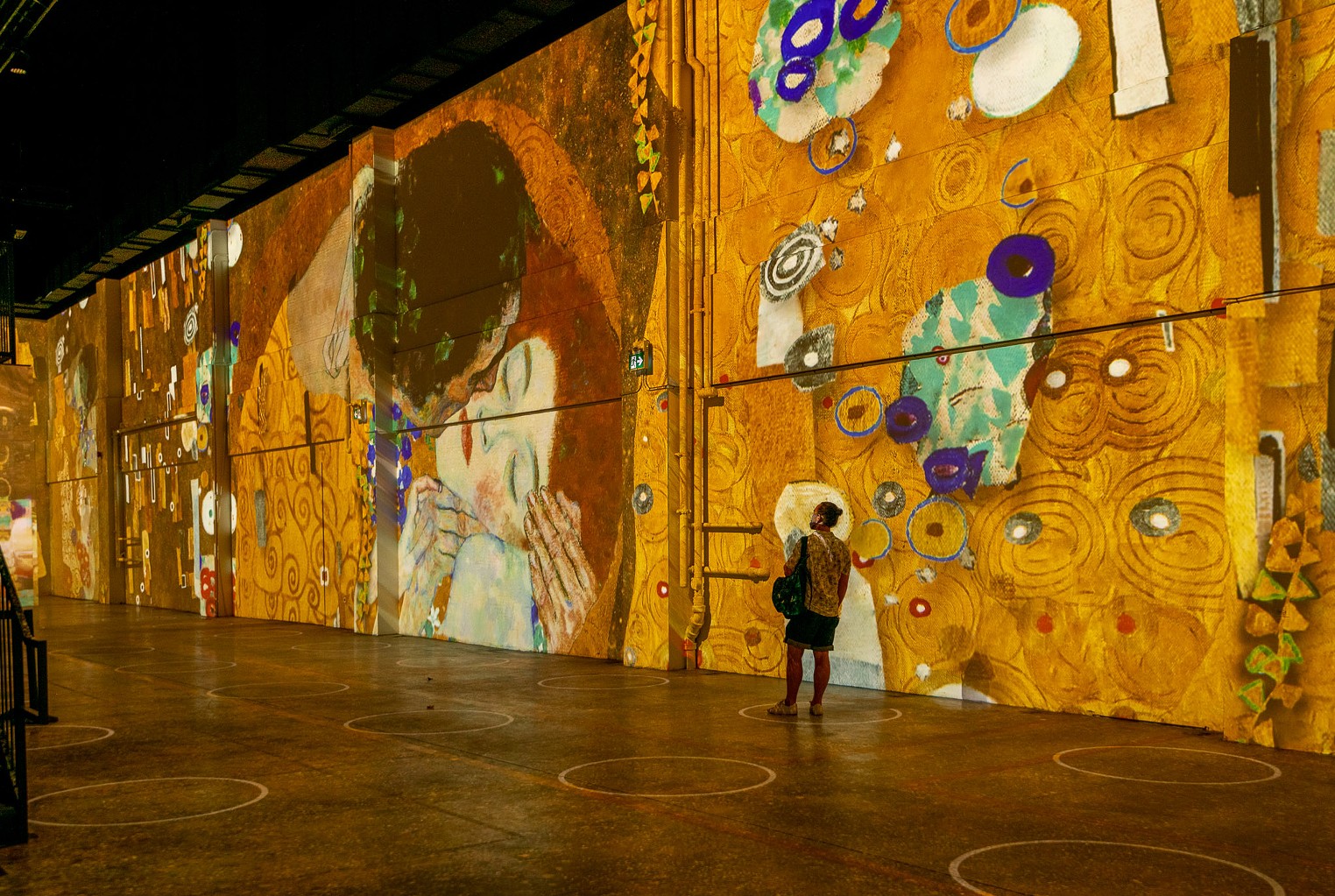 When Immersive Van Gogh opened last year at the Lighthouse Artspace in Old Town Scottsdale, it was an instant hit, and social media feeds were teeming with photos and videos of residents and tourists enjoying the experience.

Last month, Lighthouse added Immersive Klimt to the mix, based on the life and work of Austrian artist Gustav Klimt. The two experiences, Klimt and Van Gogh, will be shown in the same space at different times. But don’t expect them to be the same.

Immersive Van Gogh is simple and beautiful, with the Dutch artist’s post-Impressionist beauty moving and transforming into a soft classical score.

Immersive Klimt is darker, more racy, and more challenging for the viewer, making it a more interesting experience.

Van Gogh and Klimt are the first two installments in a trilogy dreamed up by series creator Massimiliano Siccardi, according to Lighthouse creative consultant Richard Ouzounian, who was in town for the opening.

“Massimiliano, after doing Van Gogh for us, said, ‘If you want more, my dream at the start is to do a trilogy of Van Gogh, Klimt and Kahlo, because I feel like they were the three great revolutionaries, each in their own way.’ He said: “Van Gogh personalized by putting his whole life and mental state and everything, just throwing it on the canvas. Klimt was the person who led the whole cultural revolution in Vienna, and his work evolved, and it became, I think, prophetic. And then Frida was a revolutionary on all the fronts she fought on: in racism, in feminism, in ableism, and all those things. So those were the three revolutionaries,” says Ouzounian.

The show opens with pieces of drawing paper falling and photos of Klimt igniting.

“Klimt believed that you should always paint with passion and that passion should burn,” says Ouzounian.

A scene from Immersive Klimt.

Over the next hour or so, viewers will see the evolution of Klimt’s work against the backdrop of the world of Vienna in the late 19th and early 20th centuries. Klimt’s career in painting began with a classical education, and his early works bear the hallmarks of the standard style of the time.

“At the beginning, he was all the great romantics,” says Ouzounian. “But then he kept trying to paint with his own voice, his own stuff.”

As befits a man who never married but had 14 children, Immersive Klimt is full of images of women, dressed and undressed. Regardless of their state of dress, his female subjects stare directly at the viewer, challenging them to engage.

The amount of nudity, says Ouzounian, makes Immersive Klimt perhaps not a show for young children.

“We say it’s not a family show. We don’t think anything here is lewd, but we call it a date show or take the middle school kids.”

Klimt drew a lot of inspiration from his time in Ravenna, Italy, a time in his life that figures prominently in the show. We see how Roman Empire iconography and early Christian architecture influenced some of his works.

An unexpected aspect of the exhibition comes in the form of the work of Egon Schiele, the Austrian expressionist painter who was a colleague and mentee of Klimt.

Unlike the serenity and beauty of Klimt’s best-known works, Schiele’s paintings are raw and intense, full of sexuality and sentiment.

“What is fascinating and what will come out of this is that Schiele was a very troubled young man. He also painted countless self-portraits. He was arrested several times for pornography,” says Ouzounian. “But Klimt, people asked ‘Why do you stay with him?’ and Klimt would say, “I think he has great talent.”

“At the end of their lives, people were saying he was going to be the person to succeed Klimt. He had settled down and stopped being so picky.”

Instead, just six months after Klimt’s death from a stroke and pneumonia brought on by the 1918 Spanish flu epidemic, Schiele died of the Spanish flu. He was only 28 years old.

Ouzounian acknowledges that dropping Schiele’s work on a show about Klimt could be confusing for the viewer.

“We have printed materials to hand out. One of the questions is, how many do you say? What I’m trying to suggest [audiences] do is dive.”

The highlight of Immersive Klimt for many viewers will be the section devoted to the artist’s best-known and most beloved works, golden-hued masterpieces like The kiss and Portrait of Adele Bloch-Bauer I (commonly known as the Golden Woman).

This part of the show is set to a recording of “Un bel dì, vedremo”, a well-known aria from the opera Lady Butterfly.

“Massimiliano deliberately chose a recording of Maria Callas doing it in the 1950s,” says Ouzounian. “Because the recording itself is also a 1950s recording. It’s not numerically pure, but yet Callas had a great passion.”

The tree of life was a frequent subject of Klimt.

What follows this emotional and artistic climax is a descent into some of Klimt’s darker works he created towards the end of his life.

“Part of it could have been World War I, which had just ended, which was horrible, or the rise of the pandemic, or his feelings about his own mortality, but he explored death much more,” says Ouzounian.

Images of skulls done in dark palettes give way to versions of the Tree of Life, a symbol Klimt painted frequently in his later years.

Meditations on morality were all too real for the Italian creative team; they were working on Immersive Klimt when COVID-19 was ravaging Italy, says Ouzounian, and a number of crew members fell ill and some also lost friends or family to the pandemic. .

But, not wanting to leave the show on a negative note, Immersive Klimt ends with a lively and wild segment in which snippets of Klimt’s art dance across the screen to a techno-pop soundtrack.

The viewer then emerges with a deeper understanding of an artist who is so much more than his most famous works, and an appreciation for the triumph of life and joy over darkness and death.

“It ends with an explosion of absolute joy with techno-pop music and selected Klimt images that look like a gallery of modern art,” says Ouzounian. “It’s supposed to be: you’ve been through it all, now come out the other side and live, which is what Klimt wanted people to do. Any man who had 14 illegitimate children and 32 cats must have wanted you to live. “

In Rosalia’s ‘Motomami’ album, the flamenco pop star asks: ‘How can I be more free? »