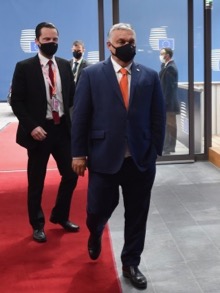 How Hungarian LGBTQI + are instrumentalised by the European Union, by Thierry Meyssan

Arrival of Hungarian Prime Minister Viktor Orbán at the European Council on June 24, 2021.

On June 15, the Hungarian Parliament passed a law prohibiting the promotion of homosexuality among minors.

At the meeting of EU interior ministers on June 21, 2021, it was decided to initiate proceedings against Hungary not for “obvious risk of violation of the rule of law” but for “risk obvious violation of the values ​​on which the Union is founded “(12266/1 / 18REV 1 COR 1).

17 of the 27 member states have asked the President of the Council of European Heads of State and Government, Charles Michel, to put the issue of LGBTQI + rights in Hungary on the agenda of the June 24-25 summit. At that meeting, the 17 accused Hungary of homophobia.

On the 25th, Commission President Ursula von der Layen strongly condemned the Hungarian law and asked her commissioners, the Belgian Didier Reynders (Justice) and the French Thierry Breton (Internal Market), to write to the Hungarian government to “ law enforcement. without delay (Ares S (2021) 4587976).

Let’s not get too carried away and take a look at what is behind these positions.

The issue of LGBTQI + rights has never been part of European values. Quite simply because the Union was created by the Treaty of Rome, in 1957, and at that time, there was no LGBTQI +. There were, however, homosexuals, even if they did not exist themselves until 1868, when the Hungarian writer Karl-Maria Kertbeny invented the concept. Until the passage of “Paragraph 175” in Germany in 1871 and the Criminal Law Amendment Act of 1885 in the United Kingdom, no one had ever thought of criminalizing same-sex relationships.

There had been laws in Europe banning sodomy, but they applied to both homosexual and heterosexual relationships, and “homosexuals” have many other practices. We are making a mistake in believing that LGBTQI + people were persecuted in the past and are not persecuted today in “modern” countries. In reality, the way we approach sexuality and the prohibitions that we impose on ourselves vary from time to time and place, but the distinction between heterosexual and homosexual partners is recent.

The LGBTQI + concept does not come from French thought in the 1960s as is often claimed, but from American puritanical thought. It is a kind of intellectual catch-all that amalgamates concepts related to sex (anatomical), sexual orientation (biological) and gender (psychological). Thus, this acronym designates:

L: Lesbian (lesbian), ie a woman having sex with another woman;

G: Gay, that is, a man having sex with another man;

B: Bisexual, that is, a person who has sex with other people of the same or different sex;

T: Transgender. We are not talking about individuals whose genetic sex is neither male (XY chromosomes) nor female (XX chromosomes), and who therefore cannot be recognized in their anatomical sex (statistically less than 1 in 1000) [1]. No, we are talking about people who define themselves intellectually in a social role different from that attached to their anatomical sex. While transgender people can match their chromosome peculiarity to their biological sex through very cumbersome and irreversible operations, transgender people do not aspire to operations and may change their sex several times in their lifetime.

Q: Queer. This term refers to the provocative culture of people whose sexuality does not correspond to the social norm. It is in this sense that I had created with others, at the beginning of the 90s, the Maison des homosexualités in Paris.

I: Intersex (intersexual): Refers to people in general whose genetic sex does not correspond to the binary classification man / woman. Some of them may be transsexual.

+: More (others). Since this litany is endless [2], the American lawyers closed it with a + which summarizes all the other options identified and to come.

In Washington, DC, the Biden administration pledged during “Gay Pride Month” to promote LGBTQI + rights, not only in the United States, but around the world [3]. Thus, the American federal buildings, with the exception of the Pentagon, hoisted the rainbow flag on their facades for the month of June. This is the framework within which the Commission and the European Council act, and not the pseudo-defense of “European values” which have nothing to do with it.

Already in the 1980s, the Clinton administration was funding the issue of AIDS in order to instrumentalize homosexual associations all over the world to put pressure on governments and sell them American treatments.

No one doubts that President Biden is sincere in ending discrimination against people because of their skin color. However, as I have shown in a previous article [4], what it does is quite the opposite. He thinks he is fighting against racism, but he is pursuing a segregationist policy. My words shocked those of my readers who considered them to be a minority opinion. But today it is not an opinion, but an analysis shared by the greatest black intellectuals in the United States. [5]. Likewise, no one thinks Joe Biden is insincere when he intends to fight discrimination against people because of their sexual orientation. But that does not prevent him from doing the opposite.

Internationally, the Biden administration uses the homosexual issue as it has used religious freedom or racism. Thus, he accuses Russia of being homophobic, while homosexuality is decriminalized there (it had been heavily sanctioned by Joseph Stalin as part of his fight against homosexual Soviets and was again legalized by Mikhail Gorbachev. [6]).

Western confusion has its roots in the institutionalization of same-sex marriage by the Scandinavian countries. It is important to be aware that marriage does not have the same meaning according to the times and civilizations. When the Scandinavian countries invented same-sex marriage, they were not seeking to create equivalence with heterosexual marriage, but to give all citizens access to a public service of the State Church. These countries have state churches whose pastors are civil servants, and they have reserved one of their public services – marriage – for heterosexuals only.

Moreover, I remember very well a lunch with a parliamentarian who was the rapporteur of the first law establishing same-sex marriage. She assured me that this law would put an end to the “sexual vagrancy” of this community. When I asked her what her country had planned for transgender people, she replied that there were no “like that” people in her country.

Let us return to the subject treated. As president of the largest European gay political association, the Ornicar Project, I have opposed gay marriage in Latin countries. This is why German environmentalist Claudia Roth, when she wrote her report to the European Parliament on the homosexual question in 1994, did not advise introducing same-sex marriage everywhere, but only ending discrimination based on heterosexual marriage. [7]

We can only regret the adoption of same-sex marriage by Spain, Portugal, France and Malta, while heterosexual marriage is a contract that governs the inheritance of children. Equality could have been achieved, not by opening marriage to infertile couples, but by ending the legal privileges of heterosexual married couples. This is the solution that I negotiated with Bishop Joseph Duval, president of the French Episcopal Conference, who supported it.

For the same reasons, France adopted the Jolibois amendment in 1994, which penalized, among other things, pornography “likely to be seen or perceived by minors. Some groups intended to use this text to censor all kinds of films, books and magazines. The Voltaire Network was created to clarify this text so that it does not restrict freedom of expression, it has achieved this, and this is what should only be done in Hungary.

The fact that the European Union interferes with the sovereign choice of the Hungarian people shows its willingness to impose itself as a supranational bureaucracy above the national democracies.

By supporting the EU on this issue, European LGBTQI + people are taking a stand in a conflict that is not theirs. They risk a backlash when the people defeat the European bureaucracy, which is inevitable.

It is interesting to note that the European Union has abandoned the argument of “manifest risk of violation of the rule of law” for that of “manifest risk of violation of the values ​​on which the Union is founded”. Everyone agrees that Hungarian law does not violate the legal principles of the Union. The values ​​argument is clarified by Commissioners Didier Reynders and Thierry Breton in their letter to the Hungarian Minister of Justice.

If they refer to Article 2 of the Treaty on European Union (Maastricht 1992) and to Article 21 of the Charter of Fundamental Rights of the European Union (2000), they do not insist because they do not ‘do not discriminate. They devote most of their letter to the Audiovisual Media Services Directive (AVMS) and the Electronic Commerce Directive. The idea is that the Hungarian law would be contrary to the commercial law of the European Common Market because it prohibits the distribution in Hungary of legal products in the rest of the Union. If this argument were to be supported in the long term by Brussels, the “obvious risk of violating the values ​​on which the Union is founded” would be limited to the risk of not being able to sell anything anywhere.

Clearly, the Union is misdirecting a fight for justice. He mocks homosexuals and their equality in law.

Orban claims he is a “fighter” for gay rights, but just look at his record