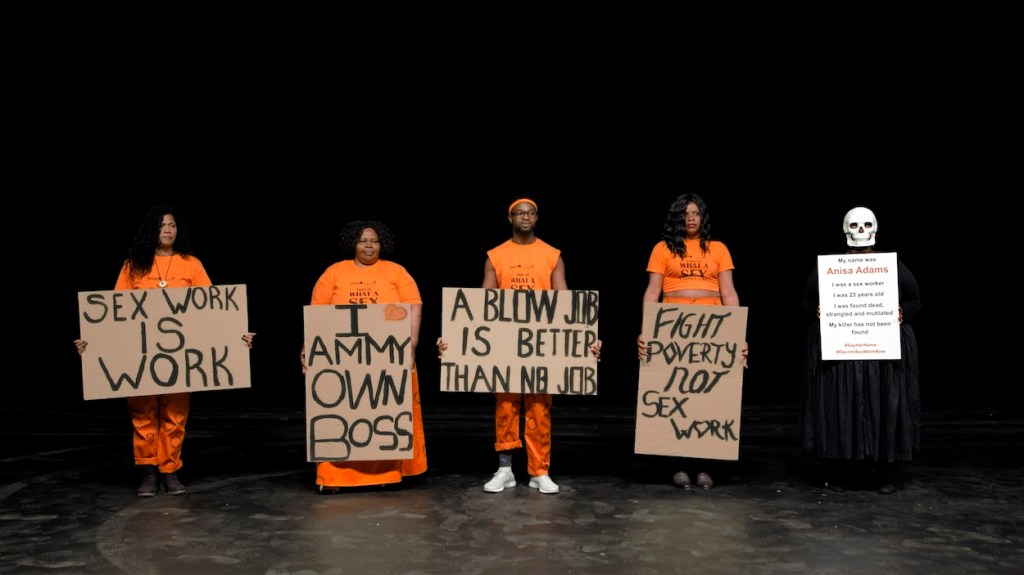 A witch hunt is a public persecution of an individual or group; the term implies a vaguely described crime with a slim chance of defense. Silvia Federici explored the historical significance of the witch hunt as a persecution of women perceived as powerful or deviant during the emergence of capitalism, but in recent years prominent men have increasingly taken up the label to deflect negative attention casually. Using the witch hunt as the setting for a two-location exhibition at the Hammer Museum and the Institute of Contemporary Art in Los Angeles, curators Connie Butler, Anne Ellegood and Nika Chilewich hinted there was something witchy about it in the female artists represented here, that they can bring to light certain truths that could trigger crowds. The works included in “Witch Hunt” make room for a more pluralistic consideration of global and contemporary strains of feminist discourse. Many are feminists in a broad sense, thoughtfully including analysis of race, gender and class, and offering layered social narratives.

The Hammer segment of the exhibit opened with thirty-two air conditioners, mounted in a grid and filled with water from the Rio Grande, blowing cool air into the museum’s lobby and grand stairwell. This icy tune by Teresa Margolles‘s The water of the Rio Bravo (2021) evoke the cold operations of another type of circulation: the attempts to migrate and the frequent deportations along the United States-Mexico border, delimited by the Rio Grande. For another of his works, The Sueno Americano (2021), Margolles conducted candid interviews with women and transgender refugees in the Respetttrans shelter in Ciudad Juárez, Mexico. Their testimony was broadcast in Spanish, without translation, from a line of wall speakers. One person comments on the changing nature of gender identity: “Yo siento que he vivido como cinco vidas en una, porque fui niño, fui niña, fui niño, fui niña, y ahora ya definitivamente soy niño” (“I feel that I’ve lived like five lives in one, because I was a boy, I was a girl, I was a boy, I was a girl, and now I’m definitely a boy”). Photographic portraits of some of the interviewees hung in an upstairs gallery, alongside a selection of their colorful wigs, evidence of the subjects’ self-style. The work elevates the voices of traditionally marginalized people, including featuring recordings of testimonies from its subjects and other forms of self-representation. Audre Lorde and others have criticized feminist discourse for historically centering white, straight, middle and upper class women; Margolles rather puts forward those who do not correspond to any of these criteria. Her work grounded the exhibition’s focus on women’s transnational conditions and concerns.

Okwui Okpokwasili‘s Poor man’s tv room solo (2014/2021) draws on the 1929 Nigerian women’s uprising against British colonial rule to offer another example of feminist struggles beyond the mainstream narratives often presented in the United States. A video was projected onto plastic sheeting stretched around a large wooden armature which, in previous installations, doubled as the artist‘stage for a live dance performance. A torso-shaped sculpture made of raffia, a plant fiber native to Africa, slowly rotated inside the frame when the artist was not present, adding visual and aural texture as it brushed against the tarp. Against a farther wall, projected images showed Nigerian women dancing and gathering. The accompanying soundtrack incorporated protest songs inspired by generations of resistance in Nigeria.

Some works clung to a more narrowly defined strain of feminism. For his sardonic video Two minutes before midnight (2021), Yael Bartana brought together a panel of women – the leaders of an imaginary nation, with real military and government experts – in a military war room inspired by Dr Strangelove to discuss the threat of nuclear annihilation and eventual disarmament. Bartana portrays the kind of feminism where women “leaning” towards positions of authority, while still operating within existing patriarchal and nationalist power dynamics. “war is not a man‘s game”, argues a participant, but at the end the president of this fictional nation-state is shown with a group of young people throwing their machine guns into a pit. Bartana seems to assert that women, if empowered, would pursue peace by rejecting military aggression. The film looks like wishful thinking.

Attitudes towards sex also vary widely among participating performers. Candice Breitz‘video installation TLDR (2017) shows how female sex workers in Cape Town, South Africa, members of the Sex Workers Education & Advocacy Taskforce (SWEAT), are advocating for the decriminalization of sex work. A young speaker named Xanny Stevens stands in the middle of a group of individuals carrying protest signs bearing slogans such as not your object and not your victim. Stevens talks about the debate surrounding decriminalization and how it fits with the tension of liberal feminism that refuses to recognize the dignity and autonomy of sex workers. In a separate room, a ten-channel video component of the same work features many hours of worker interviews. One of the women, her name given as Nosipho “Provocative” Vidima, said: “My sexual liberalism lifted me out of poverty. Directly. And me‘it’s okay with me. I‘I agree to accept the fact that I‘a sexual being. Breitz‘s is a more empathetic feminism than that of Beverly Semmes, whose Feminist Accountability Project (2002–) features enlarged images of vintage pornography that have been effectively censored; his female subjects are made pitiful, shameful under the artist‘s occasionally repainting their bodies.

Organized in the wake of the Trump administration, which has particularly undermined women, people of color and LGBTQ+ communities, the exhibition is both a welcome rejoinder at a deeply retrograde moment in political history and a canonical entry. expansive in recent feminist art history, contradictory strains included.