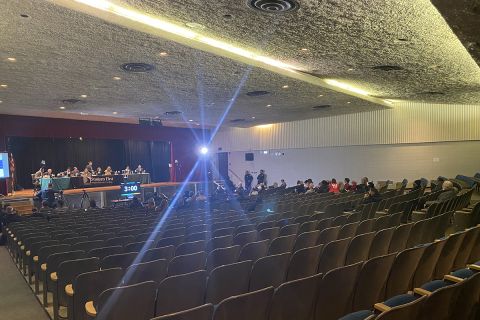 “You can’t just come here and say ‘oh, we looked at the books and we figured out that two books will be banned and the rest won’t be, the rest won’t be banned'” Abdulnaser Alnajjar, parent of a student from the district, said during a public comment. “I am, as a parent, I have the right to understand every step that was taken to make this decision. I can’t just come here and then listen to you make these decisions.

Another speaker told the board “we should fire you”, which was met with cheers.

The extent to which these views are widely shared in the community remains unclear. In last week’s board of directors elections, voters in Dearborn chose to re-elect two incumbents to the school boardwhile Stephanie Butler, a Dearborn parent who was a prominent voice in the parental rights movement, launched an unsuccessful written campaign for a seat on the board.

According to election data, the city also chose to re-elect Governor Gretchen Whitmer over Republican candidate Tudor Dixon, who ran on a parental rights platform and criticizes the way schools select reading material. But Whitmer’s margins in the city were thinner than in 2018.

During the campaign, conservative candidates and parent groups in Michigan and much of the country criticized schools for allowing books they deemed inappropriate into libraries. Dixon at one point proposed a banning what she considered to be “pornographic” books in schools and used Dearborn as an example of parents dissatisfied with public education.

Jenin Yaseen spoke at the board meeting on Monday about the importance of “affirming all members of our community, not restricting access” to LGBTQ content. She works with the group For Binata group whose Instagram page describes its mission as “Arabs and Muslims Mobilize Community to Confront Patriarchy in Dearborn.”

“Access to identity stories and education is vital for the survival and sense of belonging of marginalized students,” she said.

Board member Hussein Berry told those present at the meeting that he hears their concerns but needs to make sure the district is not breaking any laws in the process of resolving issues regarding books.

“At all levels, local, state and federal parental rights are the most important rights…so we respect them, but at the same time, we have to respect the law. We cannot allow people to judge others, to judge books at the expense of others,” he said.

The district also released final guidelines of its book review procedure on Monday. The guidelines are available in English and Arabic.

If the parent is unhappy with the decision, they can submit a form for another committee to review the book. The committee would include three parents and/or community members, three teachers and/or media specialists, an administrator, a social worker/school psychologist and a student.

The parent who filed the complaint cannot be on the committee for that specific book. Members are expected to read the book and the committee will hold an anonymous vote to determine the future of the book.

Dearborn already allows parents to withdraw their children to check a specific book or all books.