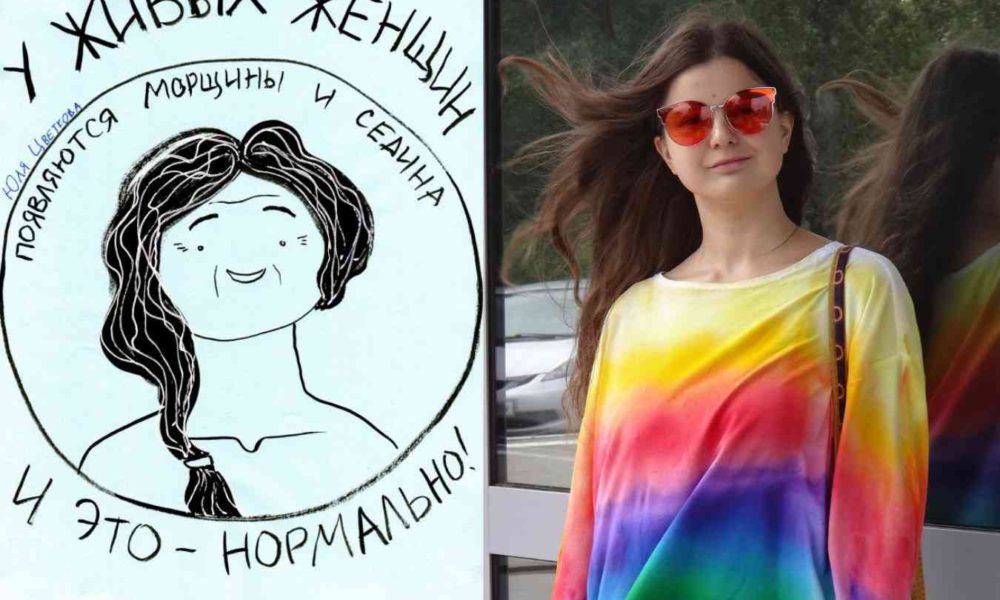 Authorities in this medium-sized city in Russia’s Far East have been actively investigating and targeting Tsvetkova since 2017 after she posted nude drawings in a social media group of herself and others as well as artwork supporting Russian LGBTQ+ people on VKontakte (VK.com) the giant Russian social networking platform.

She is charged with “production and dissemination of pornographic material” (Article 242 (3b) of the Russian Criminal Code) for her positive body drawings of vaginas on VK.com.

In addition, Russian authorities also fined Tsvetkova 50,000 rubles for being the administrator of an LGBTQ+ Facebook page and 75,000 rubles for a cartoon depicting two same-sex couples with children. This month, Russia’s Justice Ministry added her to the register of foreign media agents, in part for her work supporting LGBTQ people.

In an interview with journalist Nina Nazarova of the BBC Russian Service, Tsvetkova so far said that she had not received any official notification from the Russian Ministry of Justice about her inclusion in the register of foreign media agents.

“I have no intention of taking active steps myself to register, to create a crazy, useless legal entity,” Tsvetkova told the BBC. “It all depends on whether I end up in jail next month.

Her mother, who she lives with, Anna Khodyreva, who is her relentless lawyer, posted on her Facebook page about the designation.

“I am the mother of a foreign agent and I am very proud of it,” she wrote, using Russian shorthand. inoagentwhich has entered the vernacular.

Tsvetkova was first investigated in 2017, but according to the BBC everything has changed since November 2019, when Tsvetkova became an accused in five trials and, in effect, was locked up in Komsomolsk-on-Amur.

She was first arbitrarily detained on November 20, 2019 and remained under house arrest until March 16, 2020. There have been delays in the trial which have been marked by an ongoing investigation by the Federal Service of security at the request of Boris Viktorovitch Kononenko,
the chief prosecutor of Komsomolsk-on-Amur.

A video uploaded to YouTube on June 15, 2020 by author, activist and artist-writer Nicole Garneau details an overview of the case against Tsvetkova:

In August 2020, the Kulturfabrik Moabit in Berlin hosted an exhibition in solidarity with Yulia Tsvetkova. The exhibition was visited by around 300 people.

Independent political journalist Matt Baume, writing for Them magazine, reported last April that this was not, however, the first time that Tsvetkova had come under scrutiny under Russia’s discriminatory laws. In 2019, she directed a play criticizing gender stereotypes titled Blue and Pink at the Color of Saffron festival, a children’s art fair in the eastern Russian town of Komsomolsk-on-Amur, and authorities reportedly forced the entire event to close, fearing organizers are “attempting to organize an LGBT event illegally”, according to The arts journal.

Although the play was reportedly performed to a small crowd in defiance of the Russian authorities, Tsvetkova was twice fined under the “propaganda” ban. She was forced to pay $780 in 2019 for running an online support group for LGBTQ+ people and $658 last summer for a cartoon depicting loving gay families.

Speaking to the BBC, Tsvetkova noted that the basis of the criminal charges stemmed from the public messages of the “Vkontakte” group “Vagina Monologues”, which was dedicated to feminist art and body positivity: it presented artistic images of a naked female body.

The images of Tsvetkova herself, in particular, depicted women with wrinkles, stretch marks and body hair. Each of the drawings was signed with the phrase “Living women have…” and ended with the words “- and that’s okay!”

Russian independent media Novaya Gazeta reported that Dmitry Oblasov, the regional head of the FSB, was boosted at the request of the chief prosecutor of Komsomolsk-on-Amur. wrote a letter to Victoria Tregubenko, commissioner for children’s rights in the Khabarovsk Territory, asking the commissioner to investigate the content of Tsvetkova’s social networks for criminal violations.

The intention was to see that if, in addition to the alleged violations of the criminal code for the production of pornography, the provisions of the federal law on anti-LGBTQ “propaganda” had also been violated because of his advocacy on behalf of people. LGBTQ+ Russians.

The criminal case brought by the Central District Court of Komsomolsk-on-Amur began in earnest in the spring of 2021. While the criminal case was constantly delayed and dragged on, a civil case against a Russian extreme media lawsuit brought by Tsvetkova and her mother over the use of video of the initial FSB raid on her house in 2019 which was leaked by FSB agents was lost and the women found themselves forced to pay 180,000 rubles to this media – allegedly for “defamation”.

The criminal proceedings against Tsvetkova, who faces up to six years in prison, are closed to the press and the public.

The trial against Tsvetkova is coming to an end. On June 14, the prosecution requested a three-and-a-half-year prison term for “producing and distributing pornography” for his posts on VK.com.

The final hearing should take place on July 12 according to Amnesty International. Tsvetkova will make her closing statement and the sentence will be handed down shortly thereafter.

Opinion: We often hear that sexuality is on a spectrum. What does this mean exactly?