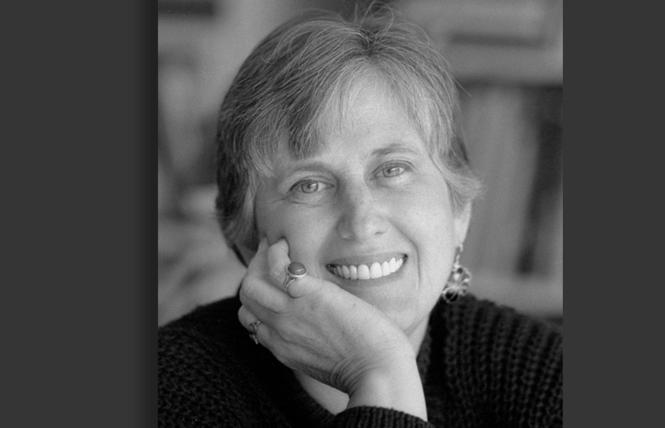 During her decades as a lesbian photographer and artist, Tee Corinne once said: “I am one of the most obscure famous artists.”

Popular? Yes. Obscure? Certainly not in art circles or the queer art world, where she started doing groundbreaking work in the 1960s.

According to “Completely Queer: The Gay and Lesbian Encyclopedia”, “Tee Corinne is one of the most visible and accessible lesbian artists in the world.”

Corinne explained in an interview with photographer Barbara Kyne in 2000 why she chose photography: â€œI wanted to do something where content and politics could be satisfied. The fine arts have accessibility issues. I was a southerner active in the civil rights movement in the south. Printmaking was a way for me to integrate art into politics. Photography is another.

Corinne wrote of her move to Oregon, where she lived in various landholding communities of women before moving to her own home outside of Medford: â€œSlowly in Oregon I reconnected with the deep levels of creativity that [ran] in me and began to produce work that I liked. “

Corinne was succinct in what she looked for in her work: â€œI am interested in beautiful, sexy and amorous images. I also want the pictures to be exciting, to create an adrenaline rush, a surge of desire so intense that the act of looking is sexual. “

In “Beyond the Static Image: Tee Corinne’s Roles as a Pioneering Lesbian Artist and Art Historian,” Stefanie Snider writes that “Corinne’s work manages to realize feminist ideals while working outside established norms in both lesbian realms and traditional art and art history. “

Writing in “Uncommon Heroes,” Paula Neves notes that “Corinne’s graphic representations of women of all shapes, sizes, beauties and physical abilities have strayed from both the fashionable standards of sexual correctness and the Playboy mentality. “.

Neves’ assessment is correct. Corinne has photographed herself and other nude women more often and these portrayals are well outside the patriarchal norms of what female bodies are meant to look like and what role they should play.

Corinne not only shattered male gaze stereotypes of lesbians, she shattered and redefined the lesbian norm of photographs by daring to portray naked butch lesbians, disabled lesbians as sexual, and female sex acts as almost one. another world in their sensuality.

Corinne’s work was so outside heterosexual norms that it was frequently subject to censorship. In 1998, Corinne’s “Cunt Coloring Book” was used by the Traditional Values â€‹â€‹Coalition as an example of pornography in a presentation to the US Senate. His book was also cited, in a homophobic effort to shock, as illustrating gay sexual behavior, during the confirmation process of the late James Hormel, a gay philanthropist from San Francisco who had been appointed by then President Bill Clinton. for the post of Ambassador to Luxembourg. Corinne’s book was, at the time, part of the collection of the James C. Hormel Gay and Lesbian Center at the San Francisco Public Library which Hormel helped fund. (It was renamed the James C. Hormel LGBTQIA Center in 2016.)

A close friend and confidant of Corinne for more than a quarter of a century, what defines her both as an artist and as a person is her boundless curiosity. She was relentlessly interested in everything, and her enthusiasm for discovering something new – like a piece of gossip from the art world of this century or another – was accompanied by a tale between us of the story which was, because of Corinne’s excitement at the discovery, as intriguing for the listener as for her.

This burning interest kept his vision broadened until his untimely death from bile duct and liver cancer in 2006 at age 62.

Born in St. Petersburg, Florida, in 1943, Corinne began carrying a camera at the age of 8 and writing about her artistic vision in high school, filling notepads with drawings and other images. Corinne studied art and painting at Newcomb College in New Orleans, then graduated with a bachelor’s degree in printmaking and painting, with minors in English and history, from the University of South Florida in 1965.

Based on her personal biography (reprinted here) and collected articles held at the University of Oregon, Corinne obtained a Masters of Fine Arts in Drawing and Painting from the Pratt Institute in 1968, after which she began to teach art classes in college. She moved to San Francisco in 1972 and worked briefly in the field of sex education, which propelled her into other artistic endeavors.

She also started drawing female genitals and collected these designs, self-publishing them in “Cunt Coloring Book” in 1975. When the lesbian publishing company Naiad Press was established in 1973, Corinne created the first 50 covers, notes his biography.

Corinne’s work has spread to art history and art criticism. She has written on art for various publications and, from 1987, was an art book columnist for Feminist Bookstore News.

This work was an integral part of her work as an artist, and throughout her life Corinne sought to discover the work of lesbian artists and other women.

Corinne’s last book was â€œScars, Ostomy, Ostomy Bag, Portacath: Imagining Cancer in Our Livesâ€. The subject was the body of her partner Beverly Brown in the last year of her life, as she died of cancer.

Corrine said: “The images we see, as a culture, help define and expand our dreams, our perceptions of what is possible. Images of who we are help us visualize who we can be.”

Corinne’s work is archived in the aforementioned Special Collections and University Archives of the University of Oregon Libraries, where it is available for research. The collection includes â€œcorrespondence, literary manuscripts, works of art, photographs, artefacts and other documents which reflect the life and work of Corinneâ€.

Victoria A. Brownworth is a Pulitzer Prize-winning journalist whose work has appeared in the New York Times, Los Angeles Times, Philadelphia Inquirer, Baltimore Sun, DAME, the Advocate, and Curve, among other publications. She is the television columnist for the Bay Area Reporter. She was among the 100 OUTs and is the author and editor of more than 20 books, including Lambda Prize-winning “Coming Out of Cancer: Writings from the Lesbian Cancer Epidemic” and “Ordinary Mayhem: A Novel” and the award-winning “Where They Sit: Black Writers Write Black Youth” and “Too Queer: Essays from a Radical Life”.

More anonymity? Age checks are coming to the web.