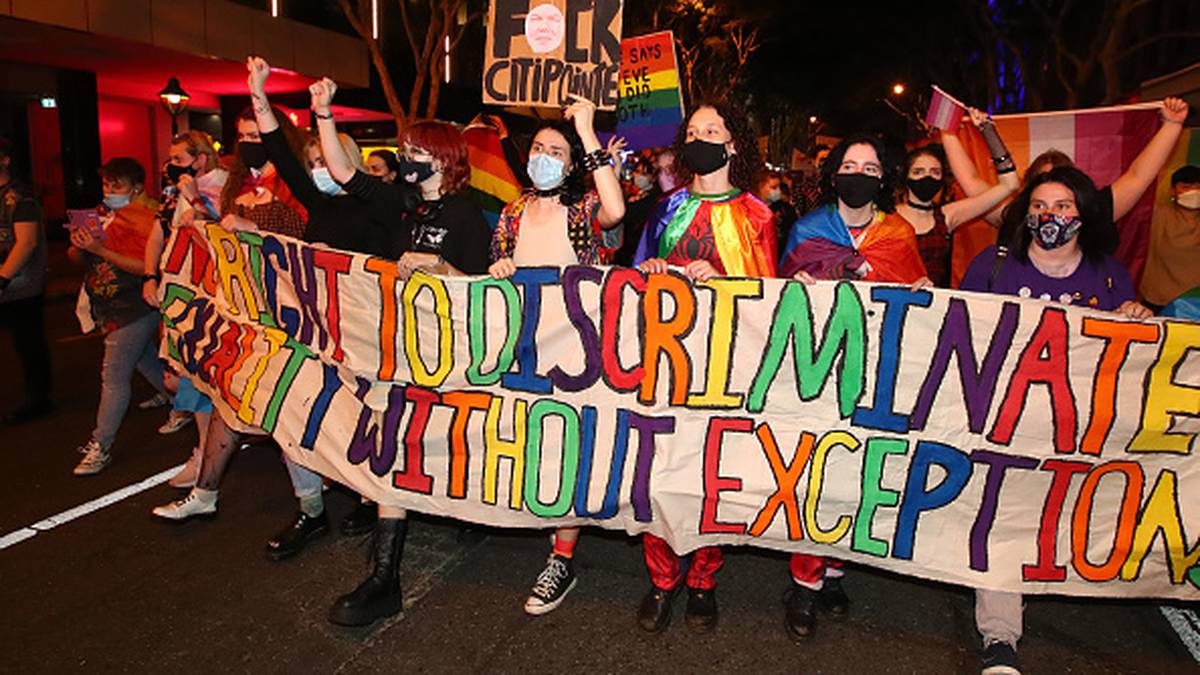 A sign showing Brian Mulheran, Principal of Citipointe Christian College, is held up during a protest on February 04, 2022 in Brisbane, Australia. Photo/Getty Images

Teachers at a controversial Christian school in Brisbane are being asked to sign employment contracts warning them they could be fired for being openly gay.

Citipointe Christian College is at the heart of another scandal after a former teacher lost his job for refusing to sign the document last month.

The private primary and secondary school in Carindale, 8km east of Brisbane, told staff that the expression of human sexuality incompatible with the academic faith could constitute termination of employment.

“Nothing in its deliberate conduct should be inconsistent with the intrinsic character of its position, particularly, but not only, with regard to the expression of human sexuality through heterosexual and monogamous relationships, intimately expressed through marriage. ” writes the school.

“Your failure to comply with these requirements expressed in the clauses above could constitute a breach of your employment contract and subsequent dismissal.”

It is the second time this year that the school has been called out for discrimination after asking families to sign a document calling homosexuality “immoral” and offensive to God.

The enrollment contracts also implied that students would be recognized by their “biological sex”.

“We believe that any form of sexual immorality (including but not limited to adultery, fornication, homosexual acts, bisexual acts, bestiality, incest, pedophilia and pornography) is sinful and offensive to God and destructive to human relationships and society.” says the contract.

“The College believes that in creating each person, God in His divine love and wisdom gave them their gender, as male or female. The College therefore recognizes a person’s biological sex recognized at birth and requires gender-conforming practices.”

The school’s terms of employment, obtained by the Guardian, date back to February this year, just weeks after former principal and pastor Brian Mulheran was forced to resign over anti-gay student contracts.

The independent school received a massive backlash and widespread media attention – resulting in the withdrawal of contracts, an apology to students, and the appointment of a new principal, Ruth Gravestein.

“It is intended to prohibit conduct that is unrelated to the workplace by preventing an employee from acting in a manner contrary to the college’s religious beliefs, whether done overtly or not.” she says.

“This is far beyond the power of any employer in Queensland. We all have the right to go to work and pursue our personal lives outside of work, even if we work for a religious school.”

A former Citipointe teacher, who refused to sign the contract, told the Guardian he had effectively lost his job due to discrimination.

“I am disgusted by this kind of intolerance and discrimination that hides behind the name of God, especially when it is formalized in a contract – that is not Christianity,” he said.

“Excluding LGBTQIA+ people from the school community perpetuates these archaic values ​​and doesn’t prepare students for the real world. In the real world, if you don’t share values ​​with a colleague or friend, you can’t take them away of your life. “

Queensland Attorney General Shannon Fentiman told reporters that people who believe they have been discriminated against in the workplace should complain to the human rights commission.

“It is absolutely appalling to see these awful and damaging clauses in Citipointe College teachers’ employment contracts – especially after the recent outrage and controversy around their student registration forms,” she said.

The school told the Guardian that the wording of the staff terms of employment was “under review”.

The Independent Education Union Queensland, which represents teachers at Citipointe, called the contracts “intrinsically unfair” and “out of step with the expectations of the modern community”.