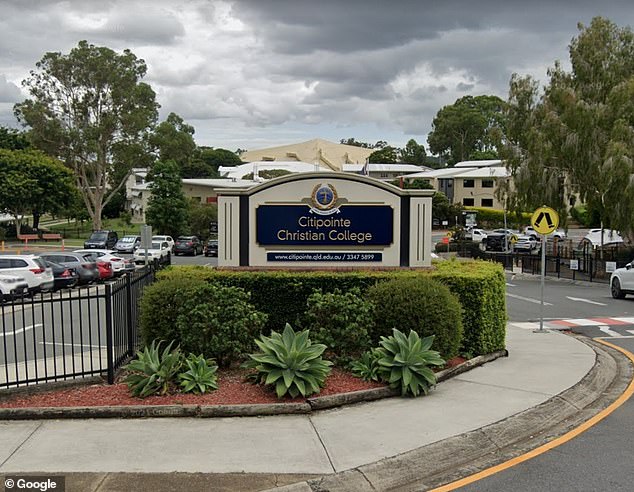 A Christian school in Brisbane has asked parents to sign an enrollment contract that allows it to expel a child who comes out as gay, just a week before school starts.

Citipointe Christian College in Carindale, southeast Brisbane, has sent the extraordinary contract to parents, in which it describes homosexuality as immoral and says it will not recognize a student’s claim to an identity of kind.

It also indicates that it will only recognize the sex assignment given at birth.

“We believe that any form of sexual immorality (including but not limited to adultery, fornication, homosexual acts, bisexual acts, bestiality, incest, pedophilia and pornography) is a sin and offensive to God and destroys human relations and society”, part of the contract states.

Citipointe Christian College in Carindale, southeast Brisbane, has sent an enrollment contract to parents in which it describes homosexuality as immoral and says it will not recognize a student’s claim to an identity gender

Citipointe Christian College principal, Rev. Brian Mulheran (pictured), said the school had tried to be ‘clear and transparent’ about its Christian beliefs in the new enrollment contract.

The contract includes new terms referring to a student’s “biological sex” that parents must agree to for a child to be enrolled.

“While each student is individually valued and equally encouraged to pursue opportunities in academic and extracurricular activities, I/we agree that where distinctions are made between male and female (including, but not limited to, for example , uniforms, presentation, terminology, use of facilities and equipment, participation in sporting events and accommodation), these distinctions will be applied on the basis of the biological sex of the individual”, he specifies.

Failure to agree to the terms “will grant Citipointe Christian College the right to expel a student from the College who no longer adheres to the doctrinal precepts of the College, including those relating to biological sex…”

Failure to accept the terms of the contract “will grant Citipointe Christian College the right to expel a student from the College who no longer adheres to the doctrinal precepts of the College, including those relating to biological sex…”

The issuance of the contract sparked a change.org online petition seeking to have the contract rescinded and which currently has over 27,000 signatures.

Area State Deputy Corrine McMillan also took to social media to say she was “appalled” by the listing contract.

“Families seeking a Christian education should not have to face discrimination based on their child’s gender or sexuality,” she posted.

“All policies and rules in all schools in Queensland must reflect Queensland’s anti-discrimination and human rights laws.”

In a statement posted on the school’s website, its principal, Pastor Brian Mulheran, said the school “has always held these Christian beliefs.”

“We have tried to be fair and transparent to all members of our community by specifying them in the listing agreement.

The statement said the contract allows parents and students to make “an informed choice” about whether they can support the school’s approach to Christian education.

“Citipointe does not judge students based on their sexuality or gender identity and we would not make decisions regarding their enrollment in the College solely on that basis,” Pastor Mulheran said, contrary to contract language.

Former Citipointe student Bethany Lau has started a change.org online petition to have the enrollment contract recalled which has so far attracted more than 27,000 signatures

He said the school based the contract on legal advice it received allowing it to change its terms because it was drawn up for “religious purposes”.

Former Citipointe student Bethany Lau, who started the online petition for contract recall, said Citipointe “uses its religious beliefs to openly discriminate against queer and trans students, while threatening to strip them of their education.” .

Another former student who said he has since come out as gay said he felt compelled to sign the petition because of the truth about sexual orientation and gender identity .

“We say we need to change the narrative, but we continue to live in a homophobic world,” he wrote.

‘At a time when they should be focused on a safe return to school and student well-being, this school is looking at ways to proactively harm student well-being and teach students to hate each other,’ another person said.

The school offers courses from prepa to 12th grade.