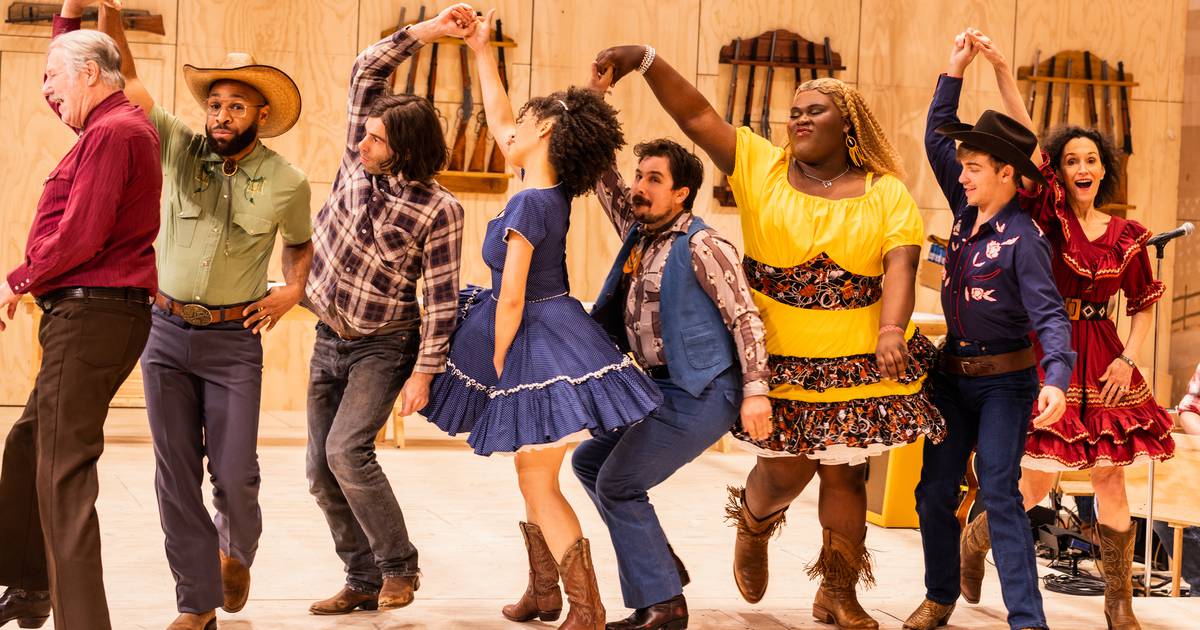 “Oklahoma! by Daniel Fish, reinvented for a new generation, certainly won’t let you sing the title track out of the theater.

Entering the Ahmanson Theater, you might expect to see the budding romance between charming cowboy Curly McLain (Sean Grandillo) and stereotypical ingenue Laurey Williams (Sasha Hutchings), culminating in a triumphant reprise of the tune we all know. : “Oklahoma!”

Its original 1943 Broadway production, which debuted in the midst of World War II, reflected the ideals of a “more homogeneous American society,” according to the show’s rating. The new adaptation features a diverse cast of characters, including varying races, ages, gender identities, and abilities, to better reflect America today. Notably, Ali Stroker, who played Teen Annie in the 2019 Broadway cast, received a Tony Award for her performance, making her the first wheelchair user to receive the honor.

Although all elements of the score and text remained the same, this cover differed drastically from the original production and previous covers. In its attempt to comment on important issues in modern America, including gun violence, mental health, and gender, it lost some of the play’s original specificity.

As the house lights remained on, a fresh-faced Curly sang an acoustic version of the opening number “Oh What a Beautiful Morning,” bringing adorable rockstar energy to the number.

A seven-piece bluegrass band accompanied Grandillo and the rest of the cast, giving the Golden Age score a new country twist. The genre suited the show’s setting as the characters reclined on wooden chairs and sported modern trucker hats, flannels and blue jeans. A capella sections of songs like “The Surrey with the Fringe on Top” emphasized the brewing romance between Curly and Laurey.

While the bluegrass style matched this modern adaptation, the thunderous electric guitar used throughout the show was shocking and even caused senior audience members on the Sunday matinee to cover their ears.

Another notable change was the adaptation of the dream ballet sequence. In the 1943 production, choreographed by Agnès de Mille, the groundbreaking 12-minute dance sequence was the first of its kind. His choreography moved the emotional lives of the characters forward through movement alone.

Rather than a company of dancers playing the lead, the new modern dance sequence, choreographed by John Heginbotham, featured a single dancer (Jordan Wynn), wearing an oversized sequined “Dream Baby Dream” t-shirt. . His piece, accompanied by the electric guitar, did not convey Laurey’s restlessness of choosing between her potential suitors – the charming Curly and the lonely farmer Jud Fry (Christopher Bannow).

Unlike de Mille’s choreography, Heginbotham’s lacked clarity on how it was meant to advance the plot. While the dancer seemed to represent Laurey, her random antics on stage didn’t seem grounded in the conflicts within the room. The repetitive choreography failed to move the storyline forward or reflect the heroine’s inner struggles. The disconnect intensified with the abrupt transition to the lively ensemble number “The Farmer and the Cowman”.

During the modern dance sequence, a live night vision camera projected a close-up of Wynn against the backdrop, allowing the audience to see details of his face, a luxury not normally afforded in theaters. theatre. This shaky projection sequence gave a glimpse of the dancer’s expressions, but it still felt disconnected from the story as a whole.

The production also implemented these night vision projections in scenes between sinister boy-next-door Jud and main man Curly. These intimate scenes, which discussed suicidal thoughts and pornography, initially took place in total darkness. Bannow’s squeaky one-word responses sent shivers through the audience. The scene, accentuated by the presence of a gunshot, foreshadowed the bloody end of the play.

The projections that flashed across the screen during “Pore Jud Is Daid”, allowed the audience to look into Jud’s eyes and truly see his emotions for the first time. Bannow’s expressive eyes in extreme close-up almost made me pity him.

Another notable change in the revival was the Jud Fry death sequence. As seen in the film adaptation and 1943 production, a knife fight, instigated by Jud, ensues between him and Curly, moments after the joyous wedding ceremony. Curly kills Jud in self-defense.

Fish’s revival spins the death sequence to reflect more modern modes of violence. Jud presents the newlyweds with a handgun during their ceremony. Without much prompting, Curly shoots and kills Jud, leaving the bride and groom bloodied and clearly guilty.

As the bluegrass band played a solemn, solemn “Oklahoma,” the characters and audience seemed bewildered and craving it even more. Perhaps by Fish’s intent, the murder sequence left me with questions about what self-defense really is in our current political climate.

Hope was restored throughout the play, however, in Fish’s portrayal of the female characters. Laurey de Hutchings was strong and had the power to choose between the men in her life. She was not a victim of the men’s attempts to woo her, but rather stood her ground and made decisions of her own accord. This strength and feminist approach to Laurey’s character struck a chord with me against the original adaptation.

A favorite female empowerment moment was “Many a New Day.” The soprano’s typical, mellow uptempo was accompanied by all the women in the cast tearing corn husks in half as they bemoaned the frustrating men in their lives.

Double Gwynne Wood gave an outstanding performance as Teen Annie, an innocent yet inherently provocative young woman. His powerful rock rendition of “I Cain’t Say No,” replete with a wired mic and vocal riffs, left the audience clapping.

“Oklahoma!” will run at the Ahmanson Theater until October 16. More information can be found on the Center Theater Group website.

From Bad Bunny to Xtina: 2022 Latin Grammys contenders to watch