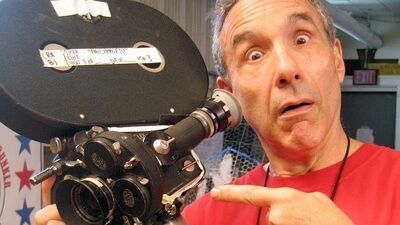 A True Artist: Lloyd Kaufman Talks About His Career and Latest Film | Interviews

Yes, I would love for people not to watch that. The folks at Troma keep putting it on YouTube. They also love to see this video where I get beat up on “The Morton Downey Jr. Show”. They love this one. But okay, we made a really bad movie called “Big Gus, What’s the Fuss?” when we were very young. We listened to people older than me, some of whom were not telling the exact truth. I should have had the courage to close this production. That’s what I should have done. We shot it in Israel and when I got to Israel they had completely changed the script. It was a mess and we should have closed it. Nothing is worse than “Big Gus, What’s the Fuss?” James Gunn and I had fun talking about it in my first book, Everything I Need To Know About Movies, I Learned From The Toxic Avenger.

Storm ends with Prospero returning to civilization and encouraging his daughter Miranda and her partner to have lives of their own. Can you imagine giving the keys to the kingdom of Troma – or perhaps a ceremonial mop – to your own daughters?

It’s a curse! They don’t have to do it unless they really want to. My eldest is a writer and my youngest is a filmmaker. The one in the middle is not involved in film, although she has a good job for Amazon. I heard they were doing something with movies. But she’s into mentoring, something to do with startups. Great work, great, very creative, very interesting. The youngest, Charlotte, played the mute child in “Terror Firmer”. She works with the guy who did “The Jinx” for HBO, which is probably an exciting position. And my eldest daughter has done a little web series, the first piece of which will air at the Museum of the Moving Image ahead of “Shakespeare’s Sh*storm.” It was shot by the same lead cameraman as “Shakespeare’s Sh*tstorm,” too.

That’s exciting. To conclude, I wanted to ask: are you really confused about Mel Brooks?

All the time. I can’t walk through an airport without a kid of 22, 25, 30 telling me: “My father is a wholesale fan of you, can I have a photo??’ So I think: Well you know I’ve been there 50 years so maybe their dad is a big fan of me Lloyd Kaufman. But as they talk, I realize: Oh they think I’m Mel Brooks. So I don’t know if I should let them take the picture or tell them I’m another guy. I usually let them take the picture because they never mention Mel Brooks by name. I had a situation in New York where people lined up to take pictures of me, thinking I was Mel Brooks. I drink a lot and walked into a bar at 10am. Someone thought I was Mel Brooks, so suddenly there was a line in the bar. A policeman wanted me to hold his badge and take a picture for him. I did, then ran to the Troma booth at a nearby convention. It happens all the time.

#WeekendPlaylist: the slaps of the week