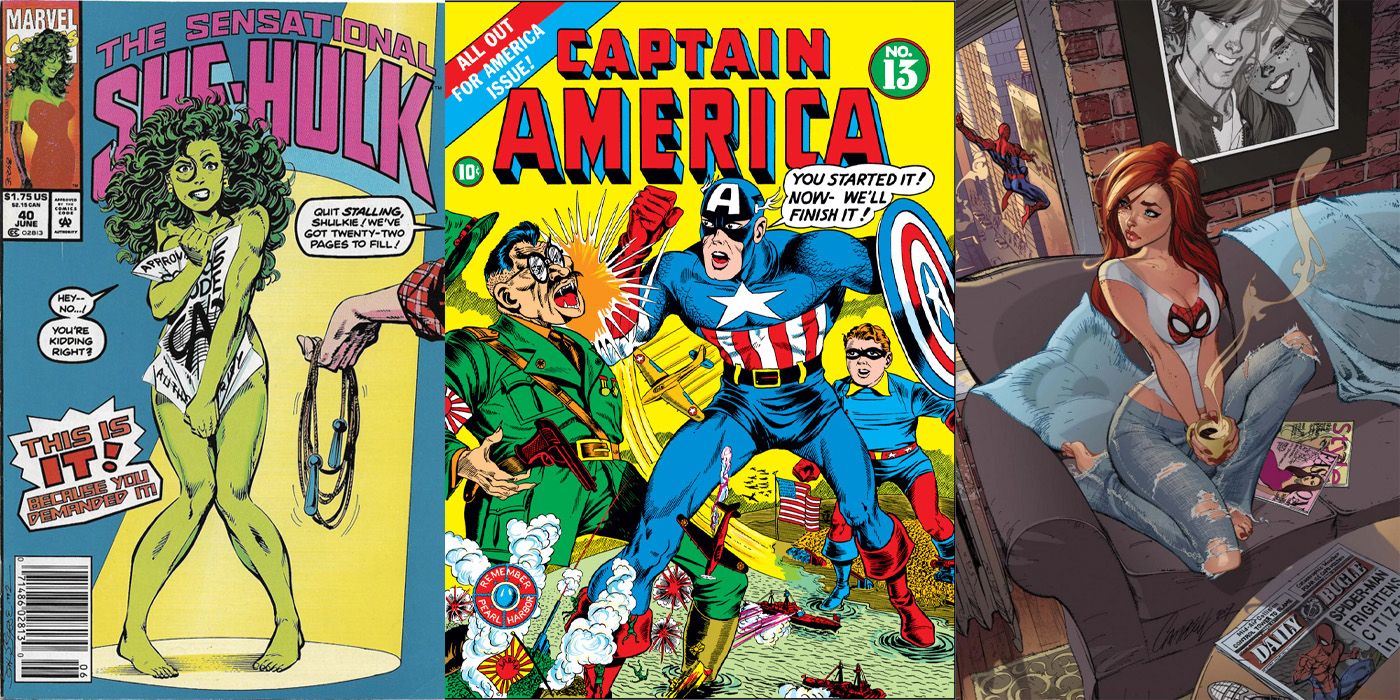 Marvel Comics has published tens of thousands of issues since its inception as Timely Comics in 1939. Some of these comics feature iconic covers, while others’ covers were forgettable. Then there are the covers that people remember, but for the wrong reasons. With artwork dating back to the 1930s, it’s no surprise that some covers have aged poorly. More surprising is how many covers from past decades have joined their regrettable ranks.

Throughout its history, Marvel has tried to be progressive. The company made headlines with its decisions to tackle issues such as alcoholism and domestic violence long before comic books regularly dealt with current issues. Marvel titles also feature characters of different genders, ethnicities, and abilities, including some of comics’ earliest LGBTQ+ heroes. Despite its track record, however, Marvel hasn’t always got it right.

Captain America came to a head in 1939 when his first Simon & Kirby cover featured Cap punching Hitler in the face. The cover carried a lot of message for the character, given her role as the pinnacle of American patriotism. Interestingly, Cap was a premature anti-fascist, entering World War II months before his country.

After the Japanese attacked Pearl Harbor in 1942, it was no surprise that Cap turned to the new American enemy in Captain America Comics #13. Unfortunately, Al Avison, who graced the cover of this issue, treated the Japanese people on this cover very differently from the Germans, relying on racial caricatures and giving them inhuman features like long fangs in an effort to dehumanize the America’s adversaries in the war.

She-Hulk is arguably one of Earth’s strongest characters in Marvel Comics. This strength is nowhere to be seen, however, in his rendition on the cover of Sensational She-Hulk #40 drawn by series writer-artist John Byrne.

Here, She-Hulk cowers and tries to stretch her Comics Code Authority title seal of approval to cover her naked body. She’s clearly uncomfortable with her nudity, and the “Because you demanded it” caption further implies a lack of consent on her part. Byrne’s hand coming from behind the scenes, handing him the props and telling him to stop stalling only makes this cover even scarier.

Most Marvel fans have probably forgotten that the company once released a comic book series based on the 1980s TV show. ALF. Marvel may be hoping that fans’ collective amnesia will remain intact if this cover is any indication of its content.

RELATED: 10 Most Trustworthy Marvel Covers From The ’90s

The cover for ALF #48, drawn by Dave Manak and Michael Gallagher, makes a pun involving the “security seal” on new products by showing ALF holding a seal (the animal). The seal is in obvious distress and it’s easy to wonder if something unpleasant is going on here.

It was another time when “His First Fur Coat” could be the premise of an entire comic book issue, as it was in Patsy Walker #105. Patsy’s affection for animal-based outerwear hasn’t aged well over time, as attitudes towards fur have changed drastically over the years.

Although artist Al Hartley had no way of knowing that fur would fall into disuse, his condescending attitude towards teenage girls has arguably aged even worse than fur, proclaiming that “the most exciting day in the life of a a teenager” is the day they get their first fur. Patsy herself says she’d rather die than take off her new coat.

Heroes in peril are common on comic book covers. This cover for Heroes for Hire #13, however, takes this concept to a new level. Elektra, The Black Cat, and Colleen Wing are bound on this cover, barely covered by their costumes, while dripping, shimmering tentacles float near their chests.

Variant covers have allowed many artists to bring their character visions to a wide audience. However, some are more successful than others. When Marvel released a variant cover for Invincible Iron Man #1 featuring Riri Williams, drawn by J. Scott Campbell, it caused an immediate backlash.

The cover depicts 15-year-old Ironheart as an inappropriately sexualized adult in an alluring pose. In response, Marvel pulled the issue off the shelves, and Campbell drew a new, more age-appropriate take on the hero for the next issue.

Marville was widely hailed by critics as one of the worst comic book series of all time. The juvenile series was launched as a satire of superhero books during a Marvel marketing promotion and involved a convoluted time travel plot. The series has also used incredibly sexualized images of women on many of its covers.

The cover of Marville #6, created by Greg Horn, depicts a nearly naked Mary Jane Watson swinging on a rope made from Spider-Man’s webbing, looking unusually vacant. On the bright side, the sexually charged imagery failed to attract readers and the series was canceled after only 7 issues.

Many comic book covers age poorly due to changing social values. Some, however, simply reflect an aesthetic that has fallen out of favor. This cover for The Fantastic Four #375, drawn by Paul Ryan, reflects (literally!) a lot of comic book trends in the early 90s.

For a time during the 90s, comic book store shelves were filled with covers that used foil or holograms to make them look valuable and collectible. This issue adds huge shoulder pads, random military jackets, and absurdly big guns that were also all the rage at the time. The result is an incredibly dated relic of its time.

Mary Jane Watson has a tough role to play as Peter Parker’s loving partner. Readers can certainly understand the trepidation she feels when Spider-Man sets out to fight crime.

RELATED: 10 Things In The Spider-Man Comics That Aged Badly

The cover for amazing spider man #601 by J. Scott Campbell reflects MJ’s concern, but many people took issue with the sexualized portrayal of the anxious woman. Mary Jane’s position on the sofa is twisted and unnatural, probably to emphasize the curve of her hip and breasts, which are pushed forward by her arms.

The Young allies the 1940s comics followed the adventures of some of Marvel’s sidekicks, including Bucky Barnes and Human Torch pal Toro. The young protagonists have often been confronted with dangerous situations, and Young allies #8 is no exception. However, the number of elements of the cover that have aged incredibly badly since its publication is exceptional.

The cover, drawn by Alex Schomburg, features offensive stereotypes of Japanese people common in propaganda at the time. This cover, however, goes one step further by depicting a black hero in an incredibly offensive style. Both interpretations dehumanized the people they represented in ways that, thankfully, are no longer welcome.

NEXT: 10 Comic Book Covers That Look Nothing Like The Real Story

‘Without the Bible, there’s no America’: Josh Hawley becomes a full-fledged Christian nationalist at NatCon